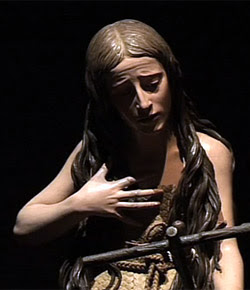 A few roses arrived first thing this morning with a card:

Nowadays in the Liturgy we celebrate Mary Magdalen as the first witness to the Resurrection, the messenger to the Apostles, that is clearly important. We can speculate whether Peter and John would have gone to the tomb if the Magdalen had not come with her barely credible message.

It is important to remember the Magdalen had a past, we don't know quite what it was, the Evangelists are possibly too polite to say, all they do say is she had seven demons cast out of her, not one but seven, and we are told this immediately after the story of an anonymous woman "who was a sinner" who pours out costly ointment and tears over Jesus' feet.

St Gregory is willing to suggest that most of the Gospels' various anonymous women, including Mary of Bethany, Martha and Lazarus' sister are the same woman; the Magdalen. The common thread seems to be "feet", Jesus's feet. St Gregory even speculates that her sin was prostitution. Today we would ask why was she she might be a prostitute, if she was. We might speculate that she had undergone some dreadful childhood trauma, perhaps sexual abuse, perhaps a broken family, perhaps poverty has led her to sell the only thing she and so many poor women have to sell, her very self. Yet if this so she has now acquired the ability to buy costly ointment, or perhaps she has overheard Jesus' words to the rich young man, "Go sell all you have..." What has she sold to acquire this costly unction?

She pours out costly ointment, she pours out her tears as a penitent, she humbles herself, demeans herself, some might thing she is merely showing off, being flamboyant, drawing attention to herself. Maybe she, maybe her motivation is mixed, human beings tend to have mixed motives,  Jesus is not concerned about the hidden recesses of her psyche, just her generosity. She has loved, she is forgiven much, her sins her many sins are swallowed up in Christ's generosity.

I've been thinking alot about the Eucharist and Christ's generosity, he gives us his body, soul, humanity and divinity in Holy Communion. He gives us his whole self without reservation, holding nothing back, without restraint, to the point of death. The eternal God, the omnipotent God, the God who is all, gives us all in Holy Eucharist, we are caught up in the absolute self-giving of Son to Father, of God to God. The generosity of the pouring out of tears and ointment, of self abasement is swallowed up in the pouring out His Body and Blood. The Magdalen's tears and obvious pain in the Garden on Easterday are even deeper than the tears of the women in Simon's dining room.

I do not think there is a mystery in her not recognising the Lord, she was so consumed by her grieve and her loss, so turned in herself, so full of her own pain and sorrow, it is only when he uses her name that he breaks into the prison of her grief and releases her. She the women at his feet is told not "to cling" but raised to her feet, more than that she is sent to the Apostles to speak of the Resurrection, to tell of Christ ascending to "my God and you God", "my Father and your Father". From being a creature imprisoned in sin, abased, prostrate in the dust the Magdalen becomes the messenger of the Resurrection.

And now for the controversial "Baroque" bit not preached:

How interesting that the response of the Counter Reformation to the pale, cold, tight-lipped parsimony of the Protestant Reformation was the exuberance of the Baroque. It is the theology of the Incarnation, of the Eucharist, of the essential goodness of creation, of God's presence in the material, all of those things Protestantism tended to reject, expressed in art. Pattern on pattern, art on art, craft on craft, colour on colour, voice on voice, it is luxury and generosity. The white wash of the Reformers was fought by marble and gilding, carpet and textile. The preaching gown, countered with lace and silk, the broken statue, the defaced wall painted with the exuberance of Titian and Caravaggio, the lost churches and cathedrals of the North with the Michaelangelo and Bramante temples in the South. The despoiled monasteries and silenced cloisters were replaced by the new Orders, the enthusiasm and generosity of the young followers of Neri, Loyola and de Lellis.
So today on our sacred Feast day, where are the fountains flowing with wine, the trumpets, the drums, the canons? Where are the golden cherubim, the flowers to cover the floor and perfume the air?Where are the choirs and orchestras, the dignitaries, the roasting oxen, the partying, the processions, the flags, the street shrines, the banners hanging from windows, the houses decked for the festival? Where are the fireworks?

Where are the new clothes for the poor, where is their food, where are the enemies being reconciled and the stranger welcomed? Where are the keys of the prison and goal? Where the medicines for the sick? Where are the bright faced young men and women willing to go to the ends of the earth or suffer martyrdom for love of Christ? Where were the streams of penitents earnestly waiting for mercy, having spent sad nights and bitter days with already returned penitents  preparing for this day of days?

Where the lavish gift and generous hearts?

Today extravagance for the Glory of God, seems pointless somehow, but then, it strikes me, so does God's extravagance towards us. Meaness is a vice, countered only by the generosity of the Cross.

The world needs demonstrations of generosity.

I love this, especially the controversial part! This is in line with thoughts I have been nurturing about the attempt to abolish the Tridentine Mass and traditional Catholic devotions. The liberals keep us on a spiritual starvation diet and call it "holy" poverty.

Happy Feast Day! Thank you for your homily, spoken and unspoken.

The feast and the uncertainty about the saint's 'past' reminded me of what happened at the funeral of the saintly King Baudouin of the Belgians in 1993:

'The King's funeral Mass, Saturday, included tributes to his actions on behalf of immigrants and AIDS victims, and the moving testimony of a Filipina prostitute who had appealed to him against the trade that brings Asian women to Europe as maids and puts them into massage parlors and escort agencies' [ http://articles.baltimoresun.com/1993-08-12/news/1993224041_1_baudouin-belgium-congo ].

Wonderful, much to think about.

Lovely. And you are so right: "meaness is a vice". People can be so economical with what they give of themselves: I'm not necessarily talking money here. It's often easy to literally throw some coins in someone's hat and walk past, duty done. I love that in Brighton I see people stop and actually chat to homeless people, find out about them and engage with them. Generosity is a smile, a word, a step towards someone; it's free and yet priceless.
I have no idea how Mary Magdalen came to be seen as such a sinner, nor how she came by her jar of costly ointment. Whatever her story, whatever her vices and woes, whatever even her deeper motives, she gave of herself.
I have never really thought about that definition of "demeaning" oneself in quite that literal way before. Thanks for a thoughtful and thought provoking post.

Much food for thought here, Father. It strikes an uncomfortable chord about my own spiritual meanness.
It also strikes me that if such a one can fall at Our Lord's feet in penitential reverence and supplication then who are we to deny Him the same when we receive Him in Holy Communion.

We need to find our own contemporary way of doing magnificence.

Victorian Gothic and Counter Reformation Baroque have become loaded with all sorts of connotations that can get in the way of the message. The time may come when they can be revived but it is not now.

My hunch is that the way to go is to recover some of the Byzantine/Romanesque influences on both the liturgy and within Catholic Church architecture and art.
Russian Orthodox procession

This is by no means foreign to us. The 11th century wall paintings in Sussex churches such as Clayton and Coombes show the strong contemporary Byzantine style that persisted into the early middle ages.

This idiom is both part of the Western church tradition, a heritage from the earliest church and is not loaded with the baggage that more recent styles carrry with them.

I'm with Physiocrat. There's rich worship "in spirit and in truth", and there's stucco and tinsel, effeminate theatricality and debased, naturalistic art by people you'd never in a million years entrust with a liturgical text. The former is Catholic; the latter is Reformation functioning as Counter-reformation. A plague on't.

Aplogies, Father, Anon was me.

Saint Mary Magdalene was the first person called by name, before the Blessed Sacrament.

Among the Saints, The Sinner is called the greatest of all the Saints.

She was the sister of Lazarus and Martha; she owned the town of Magdala. She was wealthy.

At the supper at the house of Simon, the rich man, she barged her way in past the guards who were pretty good at roughing people up.

They were afraid of the Sinner, she was a fearsome presence.

At the feet of our Divine Master, she became a little girl, and shed tears; she wept.

And her weeping moved Christ to remark “Her sins are forgiven, because she has loved much”.

As a woman weeps, her tears are filled with a perfume that occurs naturally. The more heartfelt her emotions, the more perfume. Smelling her tears, our Lord knew what was in her heart.

“Master Gardener, where have they taken Him?”

“You are right to call Me a gardener, for I am a gardener of souls”

Upon hearing this, the second person to see Christ resurrected fell at His feet and tried to wash them as before.

(The Holy Mother was the first to see the Resurrected Christ)

The Sermon not given is very Roman Catholic.

It reminds me of the words of the Dies Irae by Thomas of Celano.

That is excellent; well done Father.