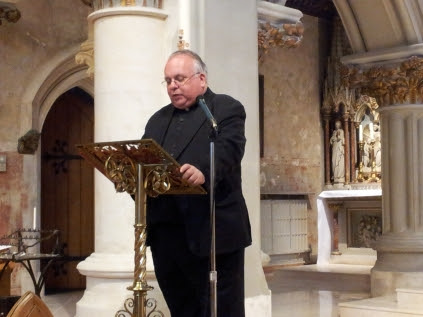 Mgr Andrew Wadsworth recently gave a speech in Salt Lake City, so much of what he said was a reiteration and development of what he had said here, when he came to speak.

He based his speech on the Holy Fathers address to the Dublin Eucharistic Congress. He rather strongly criticises the Mass at which this address was given: such things the absence of any Latin, of chant, not using the Propers, inventing a creed, having performances such as "The Priests" singing some sentimental song at Holy Communion, which gave rise to applause, the absence of silence before and after Mass, and so forth. He suggests it was all rather 80s.
He even suggests that so contrary was the Dublin Mass to everything that the Pope has urged about the Sacred Liturgy that he could be tempted to think there was conspiracy - I am sure the loyal Archbishop Pietro Marini - in charge of Eucharistic Congresses - and the leading Irish liturgists on the planning committee would never permit that.

The final Holy Sacrifice of the Mass at the International EUCHARISTIC Congress in Dublin last month was shameful and the irony of the Mass supplying so well an example of what the Holy Father admonished us to avoid in the sacred liturgy of the Eucharist was not lost on those who yearn for a return to deep reverence in the form of the Mass, a return to the rubrics which serve the substance of the Mass. However, the organisers of the Congress did not look to the Tradition and the Magisterium of the Church in planning the liturgy but to rather to the mediocre and vacuous dictates of the secularised and deeply compromised dissenting "leadership" of the Church in Ireland. This "leadership" is known by its hubris and disdain for the tenets of the Faith and the Apostolic nature of the authority of the Church and it's cowering obsequiousness to the anti-Church forces in the country's politics, Media and academia. They are still stubbornly, and with increasing desperation attempting to hold out against their inevitable demise and even in their death throes are creating a de facto schism with the help of their atheistic temporal leadership.

I shudder when I imagine this being sung as I receive communion:-
May the road rise to meet you
May the wind be at your back
May the sun shine down warm upon your land
May the rain fall soft upon your face until we meet again
May god hold you in the palm of his hand

Just WHAT is happening in Ireland - and elsewhere for that matter...

Msgr Wadsworth's comments on the Creed triggered a memory of the Mass in Croke Park, the stadium where the closing Mass of the IEC was celebrated, in 1961 at the beginning or end of the Patrician Congress. I was 18 and part of a ceremonial corp. I was on duty outside Croke Park. When I heard the tens of thousands singing Credo III the hair stood up on the back of my neck. I also felt excluded - not because I was outside but because I had never been taught to sing the Creed.

Lynda presents the usual double standard so often displayed my many contributors to this and similar blogs: the laity must have nothing to do with liturgy but if self-appointed 'experts' among the laity disagree with aspects of the liturgy then those 'experts' feel free to criticise the hierarchy.

You either believe in obedience or your do not.

While I like many readers here watched the Mass in Dublin with much despair and a certain amount of sadness, I do understand 'Spirit of Vatican II's comments to a certain extent. He/she is true when commenting that there appears to be somewhat of a 'pick and choose' approach to whom in the hierarchy allegiance is due. For example, someone like Cardinal Burke is normally afforded due respect, being referred to as 'His Eminence'. Sometimes, however, someone like the archbishop emeritus of Westminster is not given an equal amount of respect. (I pick these bishops purely for convenience). I do think it raises some interesting questions regarding obedience. We may not always like the actions of some of our bishops but do they not demand our obedience?

Coincidentally I had a similar experience to Fr Coyle, while at a much later date! I remember attending Mass in London maybe ten years ago and hearing for the first time the Credo being sung. It was a truly remarkable experience. I have since only ever heard it sung once in an Irish church, and never in my own diocese. I'm not quite sure if English readers truly appreciate the state of the liturgy in most Irish parishes. It is not only shocking but extremely depressing, and does not bode well for this 'renewal' that organizers of the Congress continuously referred to. However, as a former student (secular) at Maynooth, and having attended Masses held by the Centre for Pastoral Liturgy, it is not at all surprising.

Surely one of the Pope's representatives would have vetted this Mass and approved of it?

It was very sad to see so many Eucharistic Ministers at the Closing Mass, very sad indeed. The organisers and others obviously do not read or listen to the Church's teaching on the use of Extraordinary Ministers. We can pray for new leadership in the Church in Ireland. It is so very badly needed.

Obedience is also due by the hierarchy to the Pope's wishes for a more reverent liturgy. He doesn't, of course, command but leads by example. That so many bishops choose to ignore his example is the root cause for the angst among some of the laity, including me.
My obedience is due to my bishop by virtue of his office. But I am hard-pressed to maintain it when much of what he does and says run counter to what has been clearly expressed by the Pope.

My problem is that I am not very sure what being obedient to one's Bishop actually entails. Jesus Christ has asked us to obey his commandments but I cannot remember my Bishop or his predecessor ever asking me to obey him in anything. Indeed rather the contrary viz: confessing the same old sins every time is a bit of a waste of time, some somewhat ambiguous remarks about mortal sin, that watching "Brokebank Mountain" might make us change our views, that important feasts can now be ignored as they are transferred to Sunday, that my grandchildren would not understand about salvation etc. Okay he has discouraged us from saying the Hail Mary during Mass but I have to leave that one to the officiating priest. Indeed if I asked about the Ten Commandments I get the feeling that some Bishops would tell me not to attempt more than three of them - so I don't ask!

I think some of the comments here are more about showing respect to one's Bishop. Okay I will make a point of genuflecting and kissing his ring next time.

A friend who was on the staff of the IEC assures me that the plethora of Extraordinary Ministers of Holy Communion was consequent upon the refusal of many priests to perform this duty. Put simply, they were asked and they said "no".

The fact put forward by Eamonn is worrying. Why would Priests refuse? Perhaps they do here too.

I attended Mass in one of our Cathedrals recently and there were 24 Priests on the Sanctuary. When Communion time arrived the usual Extraordinary Ministers of Holy Communion appeared up front while the Priests all remained seated. Yes several of the Priests were elderly but at least a dozen were not.