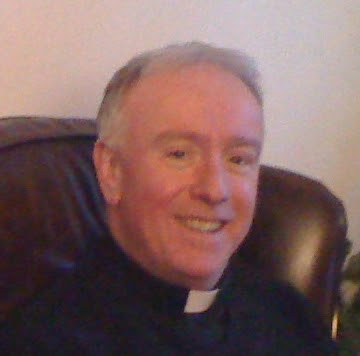 Monsignor Philip Egan VG BA, STL, PhD, the Vicar General of Shrewsbury Diocese has just been announced as the new Bishop of Portsmouth.
I don't know too much about him but he has a PhD, has defended Humanae Vitae. He was the Dean of Studies at Oscott, he is has written about the thought of Newman and Lonergan and recently published Philosophy and Catholic Theology: A Primer (Collegeville, 2009).
He seems a little different from the bishops who were appointed in the past, as far as I can see there is no Eccleston Square connection, and it is good to have one with doctorate and who has actually written a serious book.
at July 11, 2012

A blessing for us all in the Catholic Church of England and Wales in + Philip Eagan's appointment.

"A little different.." Oh, Father you really should have been a diplomat!

Looks like good news.
We are waiting too to see who will be appointed at Plymouth

Mgr Egan requested via Comments that you add his name to your letter welcoming the Pope two years ago, so he must be at least an occasional reader.......

Thanks be to God! This is what we desperately need in the Diocese of Portsmouth! On the 16th of September we had St Therese - three years and one week later we will have

"Bishop-elect Egan... [who] was made Vicar General, the second highest position in his diocese, by the Rt Rev. Mark Davies, the Bishop of Shrewsbury, in 2010.

Since then he has helped Bishop Davies to formulate and implement his policies on the New Evangelisation, in accordance with the wishes of the Holy Father.

As the episcopal vicar for the diocesan Department for the New Evangelisation, Bishop-elect Egan has overseen the relaunch of the Shrewsbury Catholic Voice as a glossy quarterly magazine and also the re-launch of the diocesan website to utilise new media to full effect in the service of the Church.

He has brought together lay people from many cultural sectors of society and has just completed a programme of preaching and catechesis to present the teaching of the four parts of the Catechism of the Catholic Church for the forthcoming Year of Faith."

Thank God we in the Portsmouth Diocese have so much to look forward to!

His first act as bishop must be to get rid of Paul Inwood and restore decent music and proper liturgical standards.