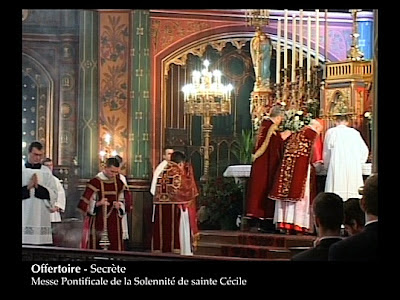 H/T Rorate Caeli
Benedict XVI intends to extend the indult of his predecessor, in fact withdrawing from the bishops discretionary power on the matter: the Missal of Saint Pius V is no longer abolished, and even if the ordinary Roman Rite is that originated from the post-conciliar liturgical reform, the old one -- used by centuries in the Church -- can subsist as an "extraordinary rite".The bishops, therefore, will not be able to deny the ancient mass anymore, but only regulate its eventual celebration, together with the parish priests, harmonising it with the need of the community. The corrections included would have reduced from 50 to 30 the minimal number of faithful who ask for the celebration according to the old rite. As for the readmission of the Lefebvrists, once the rite of Saint Pius V is liberalized, the deal should be easier.
AND
Rome, Dec. 13, 2006 (CWNews.com) - Italy’s National Alliance party is leading a petition drive among Catholics in the Liguria region, asking the bishops there to allow at least one Sunday Mass each week celebrated in the Tridentine rite.
The National Alliance, concerned about the steady influx of immigrants from South America and Eastern Europe into Liguria, argues that the use of the 1962 Missal would be an effective way to help integrate the new residents into the region’s traditional culture.
Formed by an alliance of the Italian Social Movement with members of the defunct Christian Democrat party, the center-right National Alliance has moved sharply away from its historical connection with Benito Mussolini’s fascist movement, and now frequently sides with Catholic Church leaders on public-policy issues.
at December 13, 2006