Vatican wants to play priests in Serie A 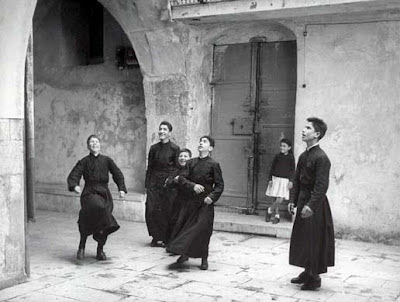 And I thought the Pope preferred playing the Piano rather than football but...

Malcolm Moore in Rome from the Telegraph
A senior Roman Catholic cardinal has announced that the Vatican wants to put together a football team of priests capable of competing in Serie A, Italy's top league.
The team would play in the colours of the papal flag — yellow and white.
"The Vatican could, in future, field a team that plays at the top level, with Roma, Inter Milan, Genoa and Sampdoria," said Cardinal Tarcisio Bertone, the Vatican's Secretary of State, the equivalent of its prime minister.
advertisement
He said: "We can recruit lads from the seminaries. I remember that in the World Cup of 1990 there were 42 players among the teams who made it to the finals who came from Salesian training centres all over the world.
"If we just take the Brazilian students from our Pontifical universities we could have a magnificent squad."
Giovanni Trapattoni, the former Italian national team manager, who is in charge of Salzburg FC, has been mooted as a possible coach.
In 2002, Trapattoni took bottles of holy water with him to the World Cup in Japan and South Korea to refresh the Italian team. But they were knocked out in the early stages. Football is close to the hearts of some of the most senior Vatican figures.
Cardinal Bertone is a fervent Juventus fan and has in the past been a football commentator for a northern Italian television station. Pope John Paul II was a goalkeeper in his youth, while the current Pope received Pele during the last World Cup and paid a visit to the German team's training camp.
The cardinal said that football could play an exemplary role in the lives of young people and football stadiums were an ideal spot for Church recruitment.
"Stadiums are modern temples, frequented by thousands of youths. I once carried out a Stations of the Cross service in the Ferraris stadium," he said.
The cardinal announced the Holy See's ambitions during a ceremony in which he was awarded honorary citizenship of Alassio, near Genoa.
He did not make clear how the Holy See — technically an independent state — could legitimately compete in Italy's domestic league. Neither did he indicate how long he imagined it might take for the Vatican to reach Serie A standard.
The Vatican has a little known football team already — made up mostly of Swiss Guards — which plays against a small number of other states who have not been recognised by Fifa, football's governing body Its only international fixture, against Monaco in 2002, ended in a 0-0 draw.
Cardinal Bertone has set up a league of 16 clubs to compete in a new championship for the Clericus Cup.
The league will run from February to the end of June in Rome, and will have both group and knock-out stages. In 2008, it may expand across Italy.
However, he said: "I insisted to the managers in charge of the lads that the games should not overlap with Mass." Matches will be played only on weekdays.
at December 19, 2006

The priests will just probably get incardinated around =)
So no transfer fees needed...

Can anyone play cricket at the English College ...?

Not sure this is a good idea. Competitive sport brings out the worst in the human male.