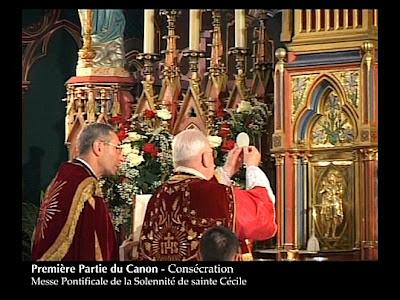 ANSA) – CITTÀ DEL VATICANO, 12 dic
The publication of the Motu Proprio on the part of the Pope which will liberalise the celebration of the Mass in Latin according to the missal of Saint Pius V is close` Cardinal Jorge Arturo Medina Estevez, member of the Commission Ecclesia Dei which this morning met to discuss the liberalisation of the Mass in Latin confirmed this. ” We have studied the document calmly” the cardinal affirmed. ” We have discussed together for more than four hours and have made some corrections to the text of the Motu Proprio” The next move belongs to Cardinal Dario Castrillon Hoyos ( president of the commission) who will present the text to Benedict XVI. Perhaps, added Medina, there will be another meeting of the Ecclesia Dei commission. Another member of the body, the Cardinal of Lyon, Jean Pierre Ricard did not want to make any comment, emphasising that he is “bound by the pontifical secret”
Comment by FranzJosf
Vatican, Dec. 12, 2006 (CWNews.com) - At a December 12 meeting, the Ecclesia Dei commission discussed a papal document that will broaden access to the traditional Latin Mass, Cardinal Jorge Medina Estevez confirmed after the Tuesday-morning session. The Chilean cardinal said that he expects Pope Benedict XVI (bio - news) to release the document in the near future.
Cardinal Medina Estevez, the former prefect of the Congregation for Divine Worship, is a member of the Ecclesia Dei Commission, which was set up in 1988 to supervise Vatican relations with traditionalist Catholics. He confirmed that the group’s December 12 meeting was dedicated entirely to a discussion of a papal initiative that will allow more liberal use of the Tridentine rite.
The cardinal told the Roman news agency I Media that the results of today’s discussions would be presented to the Holy Father by Cardinal Dario Castrillon Hoyos (bio - news), the chairman of the Ecclesia Dei commission. He suggested that the Pope might then schedule publication of the document. Cardinal Medina Estevez indicated that he did not anticipate further discussion of the matter by the Ecclesia Dei commission.
Vatican insiders expect that the papal document, widely expected to take the form of a motu proprio, will give priests permission to use the Tridentine rite-- the liturgical form used throughout the Roman Catholic Church prior to Vatican II-- without requiring the explicit permission of the local bishop.
at December 12, 2006

Pray, pray constantly that this document will give the freedom needed for the classical Roman Rite to be widely available.

Another member of the body, the Cardinal of Lyon, Jean Pierre Ricard

His Eminence Jean-Pierre Cardinal Ricard is Cardinal Archbishop of Bordeaux.