Bishops loyal to the Pope detained, forced to take part in unlawful ordination 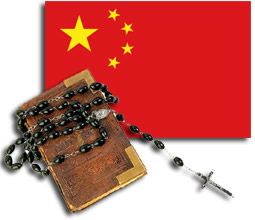 Bishops who refuse to disobey the Holy See are forced by hook and crook to take part in unlawful ordinations. The latest candidate to the bishopric is in complete isolation and cannot even be reached by phone. Government is promising huge sums of money for bishops ordinations but then fails to pay up.
Rome (AsiaNews) – Two bishops in Hebei province have been detained to force them to take part in the ordination of a bishop tomorrow in Xuzhou (Jiangsu) without the permission of the Holy See. The two bishops belong to the official Church but their ordinations were approved by the Vatican. They are Mgr Peter Feng Xinmao, ordained on January 3, 2004, as bishop coadjutor of Hengshui, and Mgr Li Liangui of Cangzhou (Xianxian), ordained in March 2000.
Source in Hebei told AsiaNews that the two bishops were driven away by officials from the Religious Affairs Bureau, ostensibly to check on some Church property in Hebei confiscated by the state in the past and that the two dioceses want back.
Instead of going to property’s location, the car went straight to Xuzhou where they are to be forced to take part in the ordination of Wang Renlei, scheduled for tomorrow morning at 8 am. At present it is impossible to get in touch with the them.
Other bishops expected to take part in the ceremony are in isolation and subjected to physical and psychological pressures. They are Mgr Joseph Zhao Fengchang, bishop of Liaocheng (Shandong) and Mgr Joseph Xu Honggen, bishop of Suzhou. They were both ordained with the permission of the Holy See.
Detaining bishops under duress is becoming the Chinese government’s only way to get bishops to attend unlawful ordinations (i.e. without Holy See’s blessing), because pastors in China’s official Church have stopped ordaining and are refusing to be ordained in the official Church without the Vatican’s permission.
Back in April and May, two ordinations were made in Kunming (Yunnan) and Wuhu (Anhui). At that time as well ordaining bishops were tricked into performing the ritual since they were told that the ordination had received the Holy See’s permission.
However, the Holy See responded with a clear statement denouncing the fact that “bishops and priests were subjected to duress by bodies foreign to the Church in order to get them to take part in Episcopal ordinations”
Even tomorrow’s candidate, Fr Wang Renlei, is in total isolation and cannot be reached by phone. Hong Kong sources said that he was isolated to prevent him from communicating with anyone from the Holy See.
Vatican sources noted that they are still hoping that tomorrow’s ordination might not happen even though it would difficult to stop it since everything is ready for the go-ahead. Even the booklets for the ceremony have been prepared with the future bishop’s logo (the sun, the moon and the dove) and motto (“Let us manifest the glory of God”) already printed in them. In the pledge the bishop will have to swear allegiance to the Chinese constitution, safeguard national unity and commit himself to building a Socialist society.
It is also alleged that government authorities have pledged six million yuan (€ 600,000, US$ 760,000) to cover the ceremony’s expenses, a huge sum for a diocese of 20,000 people, but which might be used for works in the diocese.
However, the government had promised large sums of money at the time of the ordinations in Kunming and Wuhu but has not yet paid up.
at December 01, 2006

Email ThisBlogThis!Share to TwitterShare to FacebookShare to Pinterest
Labels: china

Nothing strictly to do with this blog but can you field questions of priestly formation? What are the most orthodox seminaries available to UK students? IE those loyal to the Pope? Is the Gregorian the best institution to study? I am staggered that some Bishops send their students to
Heythrop or pay secular universities to validate degrees at other seminaries. Heythrop's website is an insult to the intelligence it seems to me. Can you advise?

Please remove this post as it has nothing to do with this topic.

I can't find your email address.