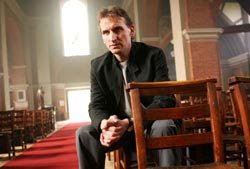 Stuart and Alison have a ten-year-old daughter Lucy. They will do anything to see she gets a good education. It's a ruthless business these days getting the best for your child. For Stuart and Alison it all starts with the best of motives.Stuart gets a wake-up call one day when Lucy witnesses a vicius knife fight at school. He had no idea things had got that bad. He takes Lucy out of school to teach her at home while they search for an alternative. But as they do the rounds they find the others wre worse. Demoralised staff, needles in toilets. They can't put Lucy through that. There's only one school that isn't a war zone. But St Mary's is a Catholic school and they are atheists. End of story. But Lucy encourages them to at least look. All you have to do is pretend. But once the lying starts events soon spiral out of control and blackmail and murder follow.

My secret agent in at the ITV gave me a press DVD of this drama, it has everything all the elements one might expect from a television programme today, including a paederast priest. The Catholic Herald lambasted it as "television at its worst", I am not sure they saw it, the editor was obviously was too busy begging subscriptions from other people's e-Christmas mailing lists. In my opinion it was rather beautiful, on a par with "Barmitzvah Boy". It seemed to be very sensitive, the Catholic, the adage "where sin is there Grace abounds", came to mind. It is a story about Grace, even the paederast is dealt with sympathetically, indeed he is a dedicated priest caught in a trap of sin. It is a highly moral tale of the consequences of sin, but don't be put off by that it is good entertainment.
I am not sure when it is on but watch it, sometime this week I think, I am sure you will agree with me rather than Herald. My only criticism surrounds the staging of the funeral, I would be very happy being a consultant to any TV company willing to pay vast amounts to our church restoration fund.
at December 27, 2006

Can someone please tell me how this ended!!?

Little girl gives up her place at St Mary's goes to a comp and keeps the faith.