Division in the CofE 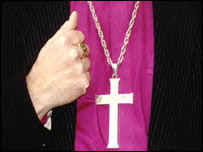 Amy Welborne says
One really wonders how this is all going to end...Anglican clergy put their feet down.
Liberal bishops who support homosexual priests are to be barred from entering some churches and money intended for Anglican coffers will be withheld.
In a dramatic escalation in the Church of England's civil war over homosexual clergy, scores of evangelical churches will break their historic links with liberal bishops who oversee their parishes.
The deepening of the conflict represents the "ultimate" protest by conservative clergy against liberal bishops' support for homosexual priests who have used the Civil Partnerships Act to "marry" their boyfriends.
The rebel clerics are setting up a panel of retired bishops to provide pastoral care to parishes in dioceses run by liberal bishops. The move is similar to the provision of "flying bishops" to opponents of women priests when they were first ordained in 1994.
Up to 100 churches have said that they intend to split from their bishops and seek support from the new panel. That is likely to mark only the beginning of the schism, however, as the panel of conservative bishops will provide an attractive alternative to other disaffected parishes.
Leading evangelicals will meet the Most Rev Rowan Williams, the Archbishop of Canterbury, on Tuesday to deliver papers laying out the plans for a restructuring of the Church.
The archbishop will be told that dozens of churches in liberal dioceses feel forced to take the radical step of breaking with their bishops. The initiative has been organised by Reform and Anglican Mainstream, evangelical groups that represent about 2,000 parishes. The initial number of disaffected parishes could rise dramatically, however, because traditionalists from the Anglo-Catholic wing of the Church have expressed their support.
Other evangelical parishes might also follow suit if an incumbent bishop with whom they agree is succeeded by a liberal cleric.
The bishops of Chelmsford, Southwark and St Albans, who have all been supportive to homosexual clergy, are among those who will no longer be allowed to celebrate confirmations at many evangelical churches in their own dioceses.

I desire all Christians should come into full communion with Peter but I know how painful it is for many members of the Church of England at this particular time so pray for the members of the Anglican Communion.
If you are going to comment please do so charitably
at December 10, 2006

Email ThisBlogThis!Share to TwitterShare to FacebookShare to Pinterest
Labels: c of e

As someone who is faced with the prospect of leaving the Anglican Communion for Roman Catholicism, the thing I find worst is not necessarily the views/questions of the various wings of the Church, because I understand different people feel different things (whether or not they're actually, at the end of the day, right), but rather the way that the various camps in the Anglican Communion just can't live with each other, and won't respect each other, let alone the teaching authority of the entire Church. It feels like such a bad place now.

Thank you for this post and for your prayers.

This represents a tragic situation for the ordinary Anglican worshipper who is happy with the model and does not want to be anything other than Anglican. But, ever since the ordination of women, the Church of England has run the risk of imploding. At no time in Christian history has an ecclesiogical communion ever been out of communion within itself and still remain an entity. What started as a Docetic schism within Anglicansim by the Anglo-Catholic wing - remember all that fuss about tainted hands and altars from bishops who had ordained women? - has turned into a factional nightmare. For the Anglo-Catholics to join this crusade is, however, extraordinary as that group is shot through with homosexuality to an extent shared by no other Anglican party. One of the reasons why a number of Anglo-Catholic clergy and laymen have remained in the Church of England since the denouement of 1992 is because they cannot live honestly with the discipline of the Catholic Church. But the Catholic Church is not immune from this problem although we have yet to see priests entering civil partnerships. Let's hope that the Catholic Church in these islands will be as welcoming as possible to Anglicans who are conscientiously drawn to us and not hurt them by making unkind comments about the body they are leaving. Spiritually it has formed them and made them the good people they are. One of the reasons why many Anglicans have been reluctant to join us is the vile attitudes of many Catholics towards them. The situation is too serious to permit that form of indulgence. Apart from any other consideration, it is deeply sinful.

When the Church of England voted to ordain women I remember that one Anglican clergyman told me that the Evangelicals might withold their vast financial resouces from supporting the main body. While sympathising with their reasons, because I believe no woman is eligible for ordination,I could not help thinking, as a cradle Catholic, that this was blackmail and it left an unpleasant taste. I do agree with anonymous, let us do everything possible to welcome converts. They have so much to offer and without them the Church in England would not have achieved the stability it has. Take Cardinal Newman, Cardinal Manning and Fr Faber, to name but three among thousands who have discovered the fullness of truth. Without them the Church would have had a quite different history since Catholic Emancipation. When I was a girl my parents regarded them as THE Catholics, and this so often proves to be true.

Under the legal rights obtained by civil partnerships are entitlements to a 'spouses' pension after one partner has died. This means that survivors of a clerical civil partnership can continue to claim support for the rest of their lives, like clergy widows. Not only do we not want to support financially clerics who have entered into this contract, we don't want to support survivors who have lived in in a relationship that is condemned in scripture. I don't know if any female clergy have yet entered into a partnership but as many are self-confessed lesbians the same applies to their surviving partners. Can you wonder that we want to make a stand?

I see what Evangelical is driving at, but his tone is appalling. My experience of this group is that they cannot cope with sin and human failure. It is only in the depth of mercy found in the Catholic Church that sinners find refuge and forgiveness.