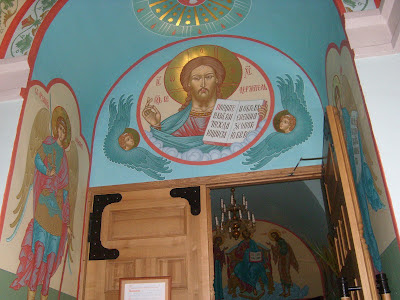 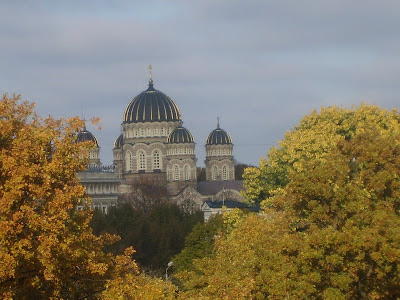 Riga was fascinating, it is just amazing to think that only in 1991, did it become free.
Not having any Latvian it was a bit difficult to find what had happened to the tiny Catholic Church; the Lutheran Cathedral was simply closed, the Orthodox Cathedral became planetarium, both were re-opened for worship in 1991.
I went to the Orthodox Cathedral for Mass this morning, it has been restored so beautifully, I was enchanted by the music. The priest sang basso profundo and the choir was two woman, nuns I think, absolutely enchanting. The congregation of about 60 were mainly females, with a few young men, when I first dropped abot mid morning on Tuesday, most were younger, lighting candles venerating icons.
at October 25, 2007

Welcome back to England, Father.

I hope you're going to post about your experience of Riga.

I honestly don't know the first thing about modern Latvia, apart from the fact that its population is Catholic, Lutheran and Orthodox, and that it was once part of the Soviet empire.

Apparently, Janis Cardinal Pujats is the Archbishop of Riga, so I suppose he must have a cathedral church somewhere, but I found very little information on the few websites available.

I hope someone knows more about the place than this !

Is the Orthodox Church Latvian or Russian?

Welcome home.
Sounds like you had an interesting time.
God bless

St. Jacob's Church, only a couple of blocks East from the Lutheran cathedral in downtown Riga is the Catholic Cathedral. And, in fact, Catholics who practice outnumber Lutherans who practice in Latvia today (before WW II the population was ca. 60% Lutheran, ca. 25% Catholic and 15% everything else).

I was in Riga in 1999 and while there interviewed both the Lutheran archbishop, Janis Vanags -- that interview appeared in the May 2001 issue of Touchstone:

and Cardinal Pujats -- that appeared in the November 2002 issue of Catholic World Report as "At Their Own Pace" (pp. 46-49), but I cannot find it online. Cardinal Pujats was particularly interesting about the slow and deliberate way that the post-Vatican II liturgical changes were introduced, with the result that most Masses today in Latvia are still celebrated ad Orientem.

Ad Orientem, did not seem to be the normal practice at S. Jakob.

btw, the bottom picture in the previous is S Jakob's Cathedral.

i love the legend of the bells of St.Jacobs. They allegedly had a tendency to ring of their own accord everytime a two timing woman passed the church. I think they were removed by the Russians in the first world war to be melted down for war type things. There was another church near the Three Sisters which was reputed to have the same bell problem.. Imagine if the Angelus bell at St Mary Magdalen's had the same inclination... Now that would give the Clifton residents association something to talk about.

Please do share more of your experiences in Riga. It seems a wonderful trip and the Christian faith there seems reborn after much persecution.