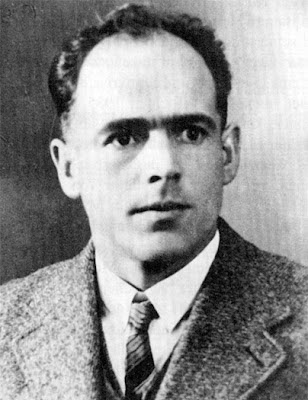 Today 26th October, Franz Jägerstätter will be beatified in Linz, Austria.
Executed in 1943 for refusing to serve in Hitler’s army, Jägerstätter was once known only to his relatives and neighbors—many of whom considered him mad. Born out of wedlock in 1907 in the tiny village of St. Radegund, his natural father was killed in the Great War. His mother eventually married a farmer named Jägerstätter, who adopted him. A Catholic from birth, Franz didn’t always follow church teaching. Rumor has it that he lived something of a wild life—possibly even fathering an illegitimate child—before reclaiming his faith and marrying.

Yes i've heard of him before..he looks so inspiring...

Haha Father, I popped down to your neck of the woods last Sunday and picked up one of the books you have at the back of the Church which had his story in it. Great story.

What a beautiful Church, Mary Magdalene was very "colourful":-)

it is a pity that that the Austrian Bishops and others have took so long to recognise the courageous witness of this holy man.