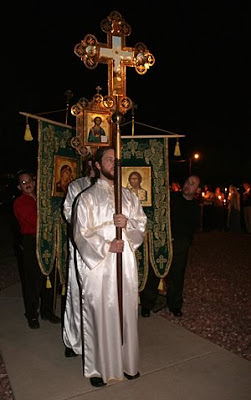 "Theophany" means, “showing forth of God”

I had an interesting telephone conversation with an Orthodox friend, we spoke about evangelisation. For Catholics we tend to think about it in terms of RCIA, The Rite of Christian Initiation for Adults, properly a series of Rites that lead to Baptism, Confirmation and the reception of the Holy Eucharist, in practice most of the “Rites” are omitted and it becomes the name given to the course in adult formation that ends up in reception of sacraments of initiation. In theory it supposed to be a series of preparatory encounters with God preparing the initiate for Enlightenment at Baptism, it is supposed to be the “Rite” itself (albeit with an explanation) that leads the initiate from the world of the paganism to Christ.
My friend was telling me about an article he read in an Orthodox magazine about “Evangelisation through Theophany” in Russia. One of the problems that the Orthodox Church has there is that there are vast remote areas where the Church was extinguished during the communist era, so there are no priests, no churches, no sacraments and little understanding of the Gospel.
The Orthodox answer: hire a train, put on it a half a dozen priests and monks, convert one of the carriages into a chapel.
The process: the train arrives in a village or town, is shunted into a siding, the priests hire a local hall, posters are put up there is a procession through the town with vested priests carrying icons and liturgical banners, they go to the hall, there is a short talk about Orthodoxy, a blessing and distribution of icons or prayer cards, few faith based folk songs, a general invitation to baptism in the train’s chapel. Baptism in the orthodox world means all the sacraments of initiation, even babies are given communion, on the following day prayer books are distributed containing a brief explanation of the creed, baptism is given, the newly baptised are entrust to Christ and His Mother and the train moves on to the next village.
The follow-up: when I asked about it, my friend says, “They are entrust to Christ and His Mother, they do the evangelisation!” 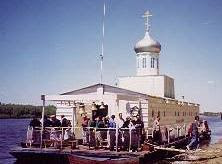 It didn’t quite satisfy my modern western sense of evangelisation, There is a church-barge on the Volga provided by Aid to the Church in Need, which I presume does a similar thing.
I read somewhere, someone saying that the Council of Trent turned a Church from a place of worship into a school room. This Orthodox process seems the complete opposite, obviously even for most Orthodox this is not the ideal, but it is expedient, it is essentially about “Rite”; the procession, the distribution of icons, the rite of initiation itself. It was presumably more or less what happened when St Francis Xavier arrived on his ship, preached, showed pictures of Christ and his mother, distributed images and then proceeded to baptise people by the hundreds, and then moved on.
In the TLM at High Mass the Gospel was sung, not to the people, who had already heard it and responded, that is why they were in the Church, but to the North, the abode, at least of the Latin Rite of the Pagans, for years it wasn’t translated because the act of proclamation was a type of theophany, an act of God revealing himself, being present at his event was saving.
What I find interesting is that this is a different kind of evangelisation, the world of icons and processions, of sung Latin Gospels, of the Rites of Christian Initiation are about encounter with God. In some sense they are an encounter with “being” rather “doing”, like the silent Canon of the old Mass it is an encounter with a God who works in the depth of the soul, who yes, uses human agents but Himself is the real agent of change and of grace. 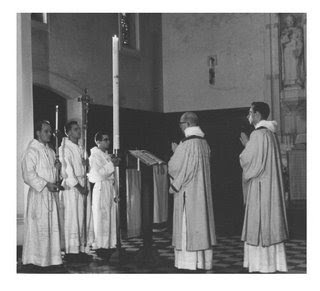 The photograph is of the Gospel being sung in the Dominican Rite from an article on todays NLM
I wonder if we have something to learn here.
at October 18, 2007

Father, i hope and pray that when you reach Westminster the RCIA will be abolished. I came through the RCIA in the late '80s and spent so many years as a result in the wilderness.It took many years of private study and a change of parish to learn and understand the true teaching of the Church.

I was evangelised by attending a good quality and fairly traditional liturgical celebration in Latin and Italian, of which I understood not one word as spoken and sung. All in a high quality Baroque building.

Had it been in English I would probably have started thinking about the words, had my attention diverted away and lost the plot.

My wife and I have the honorary title of Volga Boatmen, bestowed upon us by Fr Werenfried 'The Bacon Priest', who founded Aid to the Church in Need.

Must be around twenty years or so ago when his initiative to launch a floating Chapel, a converted barge, on the Volga and thus reach remote villages in Russia some of whom had not had any contact with the Church for decades, required donations. For our financial assistance (not much really) we received a personal letter from Fr Werenfried which we treasure to this day.

A group that I attend from time to time, assisting them in posting out material, always say the Angelus at noon.
With the coming of the M.P. some suggested that we say it in Latin and they turned to me because I had confessed to saying it in Latin many years ago.
I gave everyone a copy of it in Latin and now, on most occasions, it is said in Latin. The only time it is not, is when a couple of people are present and they have complained that they cannot understand the Latin.
Today we said it in Latin and at least one said that they were now getting the hang of it and it just flowed without any need of mental translation because you KNOW what the words are saying.
Many years ago I decided that I actually knew a foreign language when I did not have to do any mental translation but simply KNEW what the words were saying. And that is how it is with our own language, is it not? No one needs to translate what everyone, speaking in English, is saying! You KNOW what they are saying.

Did you ever see the BBC 2 series "The Monastery" in 2005? With the permission of Abbot Christopher of Worth, I've been doing copies on dvd of a video recording a friend of mine did of the series and offering the dvds free to anyone who is interested (the BBC never released it on dvd). I first mentioned this on my blog about 2 years ago and have since had about 40 or so requests for copies, some from people who have wanted to use the programmes as an evangelising tool. I mention this for your benefit and for the benefit of your healthy readership. I can post to anyone, anywhere and simply ask as payment some prayers. The end of the 3rd and final episode in particular (Tony's religious experience and the personal testimony he gives) has had a profound effect on many of those that I have shown it to.

Br James,
Yes I have seen it, you might be interested in my pastoral assistant who is holding the Holy Water bucket in the soup run pictures, who is resident in the parish now.