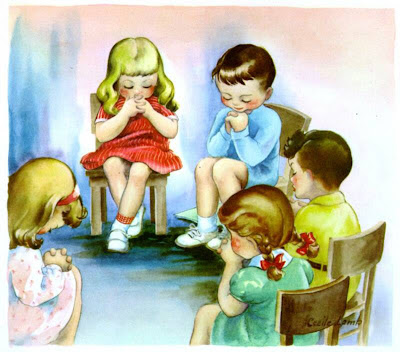 Fr Tim has a story about of teenage girls whose religious musical tastes had been reduced to a choice between "Colours of Day" and "Bind us together", a friend of mine tells of a young man, just about to get married, who when ask to make an act of contrition started to SING! "I am sorry Jesus ...." some song some nun had taught him when he had made his first communion, and had probably stopped him going ever since!

I really feel strongly about infantalising religion, whether it is by trivialising or saccharinising the faith. Confusing angels, for example, with fairies, or picturing them in pink nighties, or effemising, or mixing up the Christmas story with secular myths (I am not suggesting we go around telling people Father Christmas doesn't exist, but lets play it up), does children, and ultimately adults no favours.
I have a friend who avoids the phrase "bible story" for the same reason, because story is associated with something untrue or made up in children's minds.
We have got to remember that the passing on the faith is ultimately about Salvation, and as our catechesis of adults is even worst than that of children, it is actually about preparing children for death and Eternal Life!
at October 05, 2007

Father, you make a very good point. I suppose that infantalising is a variant on dumbing down, and that is ubiquitous in the church, in schools and in the world generally.

I went to a museum recently and found everything so dumbed down that I wished that I had not bothered to pay the admission fee.

And there was I, thinking that it was all about 'building community'!

I took a closer look at a sacramental preparation scheme for children. The catechsists' guide suggested that they shouldn't use words such as 'sacrifice' 'sin' and 'hell'.
We don't use that scheme.

There have always been those who have told us never to dumb down our speech to babies. Saying things like "Cootzie, cootzie coo" when tickling a baby under its chin is more than silly. The child learns to talk when real speech is addressed to it. The sooner the Faith is given to children, the better it is for them. They don't have to understand everything. Understanding comes with maturation. But the basic framework needs to be given from an early age.

When my son went into first grade (here in the States that is at age six), I took a look at the religious education curriculum of the parochial school to which we were sending him. In reaction, we began to work with the Balitmore Catechism every night for about fifteen minutes.

I had had the good fortune to read Dorothy Sayer's essay, "The Lost Tools of Learning," in which she suggests that the time for memory work with children is when they are very young, so I did not feel as if were engaged in some kind of psychological child abuse. Believe it or not, the kids really ate it up.


By the time my son came to his First Holy Communion at age seven, I remember specifically (this was twenty years ago) that he knew 27 questions and answers about the Mass as a Sacrifice...and much more besides. The incredible thing to me was to discover that so did his four year old sister, Stephanie. Going *into* First Grade she knew all that her older brother did and much, much more, for we had continued to work with them. She knew her basic prayers in English and Latin, the 36 line version of the Shield of St. Patrick etc, etc.

My point here is not how brilliant my kids are, but that most of our Catholic children are being robbed blind. They are capable of much, much more, not only of knowing more but of being more.

It is very easy to kindle the love of learning and the love of God in the hearts of very small children. We read the lives of saints to them, too, and did not read down to them. Many times we read full length, adult level lives- often interspersed with the question, "What does that mean." For example, around the ages of ten and twelve we read them The Cure of Ars by Trochu (here let it be noted that the basis of all this was that we did not have a TV)

There were very many good effects of all this. There was no phase of teenage rebellion in our house, no drugs, pornography or drinking, no suicide, no mental illness, no brush with the law or the courts. Emphatically, this was a good part of the animus behind my efforts, to give my wife and I the placid years that we are presently going through.

As a wonderful by product, however, is the fact that this last August 5th my daughter entered a cloistered Carmelite convent in Nebraska. She herself has indicated that her very early formation had everything to do with this.

My girls feel patronised by all things youthy!

I have to agree and I too recommend the Dorothy Sayers essay "The Lost Tools of Learning". It echoes very much the views of Charlotte Mason's move toeards a philosophy of education.

And Northern Cleric; I wrote a sacramental prep for a publisher who edited out the word 'Sacrifice'and 'blood' telling me they couldn't use those words. She also edited out 'sin' and changed it to 'mistake'.
My name is still on the book (fortunately nowhere too noticable) but it is NOT how I wrote it.

When it comes to illustrated Scripture the children I have worked with prefer realistic picture and Icons and dislike the sugary cartoon stuff so many kids Bible books are packed with.