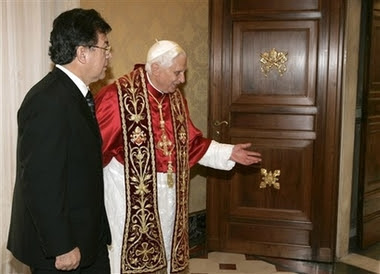 International Herald Tribune
Paraguayan President Nicanor Duarte showed up for his audience Monday with Pope Benedict XVI empty-handed after his luggage got lost between France and Italy. Inside the missing baggage was a gift for the pontiff: a multicolored poncho and a silver object.
Visitors to the pope traditionally present him with gifts, and in return they receive medals of his pontificate and rosaries for members of the delegation.
Paraguayan officials assured the papal staff that as soon as the seven missing 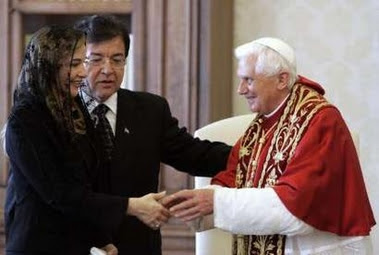 suitcases showed up, the gift would be sent over. Only three of the delegation's bags arrived on schedule.
Gifts given to Pope John Paul are in the various Vatican buildings, I spent a very happy week with an Anagoni (is that the right spelling) in the Casa del Clero. Where a poncho will go I am not sure, it is the type of gift you would leave out, hoping someon will steal it.
at October 31, 2007

I can imagine that the Pope wasn't bothered. Maybe he was pleased. I'm sure he can't use the things that are given to him, and he must be running out of space to store them. He can't even give them away as the various Presidents and Prime Ministers might get a little offended if they saw them advertised on ebay.

When the multi-coloured poncho shows up, perhaps it would go nicely with the blue and yellow Austrian vestments the Holy Father wore a few weeks ago.

Was the portait in the Casa del Clero a good likeness ?

And I wonder who it was a portrait of ?
(Or shouldn't I ask.)

I was trying to sidestep that question, I can't for the life of me remember it at all, only, I was impressed by being trusted not to steal or damage it.
There are an aweful lot of much more hideous things around.

Annigoni was popular in the 1950s in England after he painted an official portrait of the Queen. I used to eat my school dinners being stared at by a large print of this painting in the dining hall! I believe he was also responsible for an unusual 'Crucifixion' scene looking down on Christ on the Cross from above.

Well, yes.
I thought it might be an undiplomatic question, so I didn't like to ask directly.

The period when this artist was active narrows it down to three popes (if indeed it was a pope who was portrayed).

I am reminded of the reaction of Winston Churchill to the portrait painted of him by Graham Sutherland.
When he saw it, the great man commented :
"The portrait is an excellent example of modern art".
(or words to that effect)

I can't remember ever sleeping in a room with any valuable objet d'art.

It must be a strange experience.

Pelerin,
Is that the spelling.
Are you thinking of the Dali Crucifixion, based on the miniature drawing of St John of the Cross, the Father's view of the cross?

Yes - thank you for putting me right Father. I have muddled the artists - my couple of years at the local Art College were a long time ago!