Martyrdom is a “realistic possibility” for every Christian, says Pope 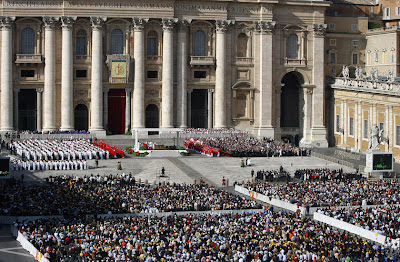 In speaking about the beatification of 498 Spanish martyrs, Benedict XVI says life can be offered without shedding blood. That can be done in silence, by dedicating oneself to others, being an important witness in our times. The beatification ceremony was celebrated by Cardinal Saraiva Martins.

(AsiaNews) – The beatification of 498 martyrs from the Spanish Civil War and yesterday’s beatification of a Polish nun, Sister Celina Chludzińska Borzęcka, gave Benedict XVI to opportunity to touch upon a central tenet of the faith: martyrdom. Indeed martyrdom is a “realistic possibility” for every believer who lives his or her faith coherently. But in addition to the giving one’s life as a result of an act of violence there is also the “silent” gift in “everyday life” made by those who dedicate themselves to the poor, i.e. those who give an “important witness in the secularised societies of our times.”

The Pope addressed the issue before a crowd of some 50,000 who had gathered in Saint Peter for the recitation of the Angelus, including a large number of Spaniards with unfurled flags who had previously taken part in the beatification ceremony presided in Saint Peter’s Square by Card José Saraiva Martins, prefect of the Congregation for the Causes of Saints.

“The contemporaneous inclusion of such a large number of martyrs to the list of the Blessed,” said the Pope, “shows that the supreme witness of blood is not an exception reserved only to a few individuals, but is a realistic possibility for the entire Christian people. We are in fact talking about men and women who vary in terms of age, vocation and social background but who paid with their life their faithfulness to Christ and the Church. The words by Saint Paul that echo in this Sunday’s liturgy are fitting: “For I am already being poured out like a libation,” ... “and the time of my departure is at hand. I have competed well; I have finished the race; I have kept the faith (2 Tim, 4: 6-7).”

“The month of October, which is dedicated in particular to the missionary action, thus ends on the luminous witness of the Spanish martyrs,” Benedict XVI stressed. “Their example bears witness to the fact that the Baptism commits Christians to participate with courage to expand the Kingdom of God, going as far as sacrificing their very lives. Not everyone is called to violent martyrdom,” the Pope added. But “there is also a bloodless ‘martyrdom,’ which is no less significant, like that of Celina Chludzińska Borzęcka, wife and mother, widow and nun who was beatified yesterday in Rome. She is the silent and heroic witness of so many Christians who live the Gospel without compromises, performing their duties, generously devoting themselves to serve the poor. Their everyday martyrdom is a very important witness in the secularised societies of our times. It is the peaceful battle of love that every Christian—like Paul—must indefatigably fight.” At the end, “the race to spread the Gospel commits us till death,” said the Pope.
at October 28, 2007

This is a very thoughtful and very encouraging address by by the Pope who seems to be saying quite unambiguously that martyrdom in blood is not the only form of martyrdom.

Is there, I wonder, what I would call, for want of a better term perhaps, such a thing as psychological martyrdom ?

What do other people think ?

The Holy Father says that "Christians who live the Gospel without compromises" live a form of bloodless martyrdom.

In this weeks's Catholic Herald Cardinal Murphy O'Connor speaks being 'pragmatic' - i.e. accepting compromise - in supporting abortion laws that stop some abortions but allow others. Would I be right in assuming that like, Fr Boyle (http://south-ashford-priest.blogspot.com/2007/10/is-it-just-to-campaign-for-more.html) you would disagree with the Cardinal's compromise?

Peter. what do you mean by psychological martyrdom?

What does psychological martyrdom mean ?

Have they endured psychological suffering as a result of their loyalty to the Church and authentic Catholic doctrine.

People might not want to publish their private feelings or experiences, but might wish to comment in a more general way on what loyal Catholics endure for their faith, and what sort of suffering their witness brings them, if not in body then in mind.

And I'm trying to avoid using the word "mental" as in mental illness, such as depression, psychosis, etc.

Perhaps I mean mental torment or agony, as in Christ's Agony in the Garden of Gethsemane.

I found the Pope's speech very moving when he referred to the untold number of people who silently give their lives every day in their faithfulness to Christ and the Church.