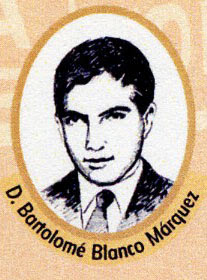 CNA).- Bartolome Blanco Marquez is one of the youngest of the group of 498 martyrs beatified yesterday, Sunday, at the Vatican. A committed Catholic, the 22 year-old layman wrote a moving letter to his girlfriend Maruja just hours before his death.
“Your memory will go with me to the tomb, and as long as my heart is beating, it will beat with love for you,” he told Maruja. “God has desired to exalt these earthly affections, ennobling them when we love each other in Him.”
"Therefore, although in my last days God is my light and my longing, this does not keep the memory of the person I most love from accompanying me until the hour of my death,” he wrote in his letter.
His story
Bartolome was born in Pozoblanco on November 25, 1914. orphaned as a child, he was raised by his aunt and uncle and worked as a chair maker. He was an outstanding student at the Salesian school of Pozoblanco and also helped out as a catechist. At the age of 18 he was elected secretary of a youth division of Catholic Action in Pozoblanco.
He was imprisoned in that city on August 18, 1936, when he was on leave from military service. On September 24 he was moved to a prison in Jaen, where he was held with fifteen priests and other laymen. There he was judged, condemned to death and shot on October 2, 1936.
During his trial, Bartolome remained true to his faith and his religious convictions. He did not protest his death sentence and told the court that if he lived he would continue being an active Catholic.
The letters he wrote on the eve of his death to his family and to his girlfriend Maruja show his profound faith.
“May this be my last will: forgiveness, forgiveness, forgiveness; but indulgence, which I wish to be accompanied by doing them as much good as possible. Therefore, I ask you to avenge me with the vengeance of a Christian: returning much good to those that have tried to do me evil,” he wrote to his relatives.
On the day of his execution he left his cell barefoot, in order to be more conformed to Christ. He kissed his handcuffs, surprising the guards that cuffed him. He refused to be shot from behind. “Whoever dies for Christ should do so facing forward and standing straight. Long live Christ the King!” he shouted as he fell to ground under a shower of bullets.
at October 29, 2007

If Catholics today had an ounce of the passion, love and conviction for the Faith that this young man had, we could move mountains, change the face of the world and make it more conformed to Our Blessed Lord Jesus.

The reality is we can hardly be bothered to get out of our comfy armchairs to go to Holy Mass once a week let alone take a Martyrs bullet for Christ.