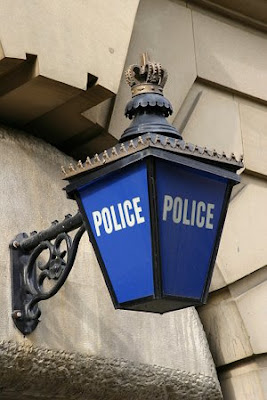 The Dail Mail reports another instance of the Metropolitan Police using coercive tactics to curb freedom of speech.
A priest has been interviewed by police on suspicion of inciting racial hatred for expressing his Christian views in his parish newsletter.
Father John Hayes, 71, was quizzed for more than an hour after commenting on the case of a Muslim girl who went to court over her wish to wear a full veil in class.
A sergeant and community support officer turned up without warning at his presbytery after an allegation was made to a Scotland Yard 'hate crimes' unit.
The inquisition in Hornchurch, East London, prompted a furious row about policing priorities. In the past 12 months there have been five murders, 33 rapes, 424 robberies and 2,267 burglaries in the local police borough of Havering.
Yet, despite being accused of turning a blind eye to the inflammatory remarks of some Muslim preachers of hate, the Met still found time to quiz Fr Hayes.
read on here
at October 15, 2007

It's an outrage. Are there NO politicians willing to speak up for traditional Christian values?

This is the new labour political correctness 'aparatchik' beginning to flex it's relativistic muscles. Armed with all manner of subjective and woolly so-called 'hate crime' legal mumbo jumbo just about anything alleged by anyone will have to be followed up by poor PC Plod - as if our police force have nothing better to do - and I cite your statistics on REAL crime Fr Ray.

New labour (and I am not really a particularly political animal) has to be eliminated from power just as soon as The Brown calls for an election (assuming they do not somehow enshrine themselves legally as the only body allowed to govern in the UK).

The danger with this hate crime non-sense is that just about anyone with an axe to grind will be able to point a finger and create hell for the accused. Guilty unless you can prove yourself otherwise is a system that can take a massive toll on a person's health, finance etc... It's the easy option for individuals or groups that know they've either lost the argument, had no argument in the first place or on a more sinister level have a very definite agenda - in this case anti Christian and more so anti Catholic. And what about those muslims who were photographed outside Westminster Cathedral earlier this year with their 'hate crime' banners, placards and anti Catholic abusive onslaught. Are they behind bars etc... What about the gay parades which flaunt ALL laws of public decency and basic cultured behaviour - yep, they get away scot free.

Gem,
Not many in this country who aren't trashed by the secularist media.

I am not party political but I expected nothing less from Blair's Britain. It will only get worse under Brown, because the governement is institutionally religiously 'racist' - in other words it is anti-Christian. Don't know if any of the other lot are any better, but they could not be worse.

And where are our Catholic leaders while all this is going on? Probaly drinking Fairtrade coffee at a J and P seminar at Eccleston Square.

Wait to see what happens under SORS. It's only a matter of time.It will be the Fr Hayes' (or Fr Blake's) of this world who stand up to be counted. Doubt we'll see any rearing of episcopal heads above the parapet.

Someone must have given the police a priority list. Defending islam seems to be pretty high up.

I see that the Mail report refers to Mr. Hayes after its initial statement that Father Hayes had written about this Muslim woman in his parish newsletter. This is another of the steady downgrading of things Catholic.
It has gone on for years, so much so, that most Catholics now do not know how to print the word MASS. I read on this blog and that one that the Mass is referred to as the mass.
I have said this before and I'll no doubt say it again, Catholics should be most careful to distinguish between a mass and a Mass. The common word 'mass' simply refers to any collection or group of some substance. One can have a mass of flowers, a mass of manure, a mass of people, a mass grave, the opinion of a mass...etc,etc.
In Physics, mass multiplied by gravity equals weight.
The Holy Sacrifice of the Mass does not belong in that category. The capital "M" distinguishes a Mass from the 'mass'.

Sad to say that he was dobbed in by one of his parishoners. Is this what the Catholic faith has come to - massive collective failure of nerve aided and abetted by police with nowt better to do? I hardly think that's the sort of attitude that carried the day at Lepanto, Poitiers and Vienna.

Oh Lord, make haste to help us!
Our Lady of the Rosary, pray for us!

Luiz (from Brasil)
The situation is getting pretty bad in England regarding persecution fo Christians.
Many sources say that this is an organized agenda orchestrated by Freemasons worldwide.

one more item wich makes us belive we are in the tributaltion period stand up and bee counted bescause the LORD is near at hand.....

John,
If it was me, my appologies, it would have been a typo. I am not good at proof reading.
I think we ought to get back to Holy Mass, or the Holy Sacrifice of the Mass.

We can expect more of the same no doubt!

I pity England at present. You are all living Big Brother with the Socialist state over there. I know the US isn't far behind, but at least with our written constitution, we're still a bit more anarchic, which leads to a bit more latitude. Gordon Brown is going to be Cromwell revisited. When will England break free again. Pray for Mary's Dowry, but I fear the worst is yet to come.

It doesn't require too big a leap of the imagination to think that there could be a time, in the near future, when the police will raid Catholic bookshops and seize inflammatory material.

Pity we can't bring back Guy Fawkes and help him make a better job of it.The secularist "front" are running around in ever decreasing circles and we all know where that ends.

Nickbris has a good point. I think English Catholics should start to celebrate Guy Fawkes Night with a lot more gusto...but for the opposite reasons that their compatriots do!

November 5th as a new Holyday of Obligation?

Oh I bet the mandarins at St Shinypants (aka BCEW HQ at Eccleston Square) will be demanding that we all go to Diversity and Sensitivity Training Workshops now....