Moral Relativism is a threat to democracy 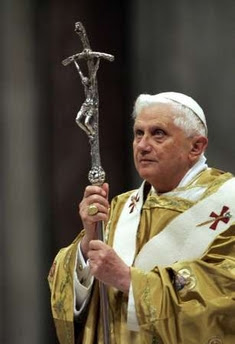 (CWNews.com) - By denying the existence of natural law, secularism is undermined the very foundations of democratic society, Pope Benedict XVI argued in an October 5 private audience with members of the International Theological Commission.
Disregard for natural law, the Holy Father said, has caused "a crisis for human-- even more for Christian-- civilization." In response to that crisis, he continued, Church leaders should mobilize "both lay people and followers of religions other than Christianity" to reclaim a common moral tradition.
The International Theological Commission had gathered in Rome this week to discuss a forthcoming document on natural law, and the Pope underlined the importance of that topic in his remarks. The natural law, he observed, "makes it clear that the ethical content of Christian faith is not an imposition dictated from outside man's conscience, but a norm that has its basis in human nature itself."
Because it is not a matter of faith, but a form of moral reasoning that is "accessible to all rations creatures," the natural law can form the basis for dialogue in civil society, the Pope observed, and society can reach a consensus on fundamental moral questions.
Once that shared recognition of natural law is withdrawn, the Pontiff warned, there is no means of resolving public debates other than a contest of political strength. Then process of legislation becomes "not the search for good but the search for power, or rather the balance of power."
The problem facing contemporary democracies, the Pope said, is a form of ethical relativism, based on the mistaken notion that "relativism guarantees tolerance and mutual respect."
In fact, the Pontiff said, this relativism has caused a profound crisis in society, so that "the fundamental essentials are at stake: human dignity, human life, the institution of the family and the equity of the social order--in other words the fundamental rights of man." The crisis can only be overcome, he said, by restoring an appreciation for the natural moral law "in conformity with right reason-- which is participation in the eternal Reason of God."
at October 05, 2007

Rather giving huge long cut and paste comments please summarise and give the site.

Father, a thought occured to me the other day
If Jesus Christ is who we profess him to be
If His Church truely does subsist within the Catholic Church i.e. truely is His Bride, then would it not follow that disturbances or wounds to His Bride would have ramifications for all the created order. What I am getting at is, does trouble inside cause trouble outside? Not the other way around?

The Gospels indicate that the created order responds to cosmic events - death of our Lord on the cross. Star of Bethlehem etc. I know that these are usually read as techniques used to underline importance, however could they also be trying to teach us that an actual relationship exists?

Thank you for the very interesting blog!