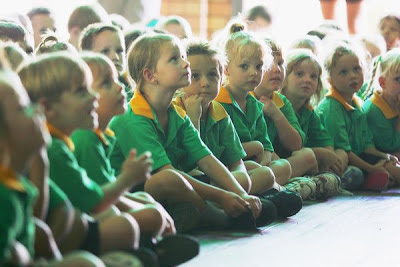 I have just been talking to our one of teachers, and she told me about another Catholic teacher who was helping out at another of our city's schools. she mentioned "God" to a little girl who stuck her fingers in her ears and said, "You can't say that word to me, I don't believe in Him". Apparently when they sang songs which mentioned God for some reason half the children refused to even mouth the word.

The City of Brighton and Hove is a pretty atheistic place, the "Gay Community" don't want God in their bedrooms, the two universities seem to take an agnostic and often Marxist stance on most things. I just wonder where these children get this from.
at October 12, 2007

The whole Council isbent & corrupted by PC.Everybody walking about is miserable and I always thought that Gay meant happy.It makes one wonder who this Godless lot pray to.When all the credit cards are MAXED OUT people will have to be nicer to each other to survive.

Philip Pullman could be one answer.

Thank goodness God believes in them!

How incredibly sad. I do not think I would necessarily at all believe that it was the gay community per se, that put a hatred of the very word "God" into these children. I have known a number of gay people who do believe in God.

There is a millstone waiting for people who poison the mind of children. Did the teacher ask the child why he hated God? Or was the teacher too stunned to say anything?

It's the parents, I fear. I've come across similar stuff from friends of my five-year-old. What surprises me though, is the vehemence of anti-God sentiment in small children. You'd think they'd be incurious simply, but they're actually quite indignant and aggressive about it.

Most of these "Don't mention God" kids are not the children of Dawkins-style intellectual atheists who are brainwashing them.

I suspect a large number are from broken homes, or have co-habiting parents. Or their mothers have had abortions. Surely, the voice of God speaks to everyone. And many more non-religious people than we might think are inwardly troubled by uneasy consciences prompted by their lifestyles and past sins.

Children, on the other hand, are the embodiment of innocence and are very close to God. It is not surprising that adults troubled by guilt feel threatened by this and encourage their kids to think of God as a naughty word.

It's time to pray to some of the saints and blesseds who had a similar background. One of my favourites is Blessed Laura Vicuna, a Chilean girl whose mother "shacked up" with a man who was violent to Laura. She offered her life for the conversion of her mother, and died at an early age, but her prayers and sacrifies worked. She was beatified in 1988. Time to put her on the fast track and canonize her, I think.

While these parents might enjoy dressing up as Marx by teaching positive atheism, I don't think they (or Marx) realize[d] what they are [were] doing to their children.