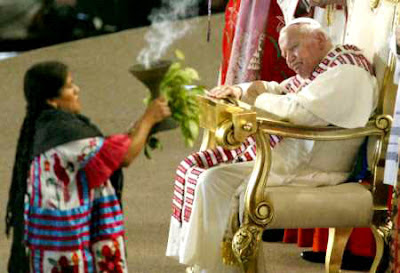 John Allen has an interesting piece on Archbishop Pietro Marini's idea of inclturation and his replacement
One illustrative flashpoint is liturgical dance. The Congregation for Divine Worship officially frowns on dance in the liturgy. In 1975 it issued a document titled Dance in the Liturgy, which concluded, “[Dance] cannot be introduced into liturgical celebrations of any kind whatever. That would be to inject into the liturgy one of the most desacralized and desacralizing elements; and so it would be equivalent to creating an atmosphere of profaneness which would easily recall to those present and to the participants in the celebration worldly places and situations.”
In 1998, the congregation wrote to the bishop of Honolulu to ban the use of hula dancing in any liturgical context, a custom that had become common among Catholics in Hawaii. Yet when John Paul visited Brussels in 1995 for the beatification of Father Damien DeVeuster, the famous saint of the Hawaiian lepers, a hula dance was performed smack in the middle of the ceremony.
For those who know Marini’s style, it was hardly a surprise. Anyone who has ever attended a major papal liturgy, such as a World Youth Day Mass or a major canonization Mass, has seen enough dance to remind them of Broadway production numbers. During the World Youth Day Mass in Rome in the summer of 2000, for example, a troupe of young dancers bearing flags with different colors representing the different continents was one of the highlights of the event.
In Mexico in 2002 when John Paul II canonized Juan Diego, native Aztec dancers gyrated down a walkway towards the pope in the Basilica of Our Lady of Guadalupe as native music blared forth. The next day, when the pope beatified a pair of Mayan martyrs in the same spot, another native song-and-dance routine was performed. This time there was the further twist of a limpia, or purification, ceremony. The Indian blessing is believed to cure spiritual and physical ailments by driving off evil spirits. Indian women bearing smoking pots of incense brushed herbs on the pontiff, Mexico City Cardinal Norberto Rivera Carrera and other prelates as the dancing unfolded.
In effect, these indigenous dancers exorcized the pope. Although the choice generated controversy both in Mexico and in Rome, Marini defended the use of such an indigenous ritual within a Catholic framework.
“We discussed it a great deal here in this office with the responsible parties from the local church,” Marini said in 2003. “I spoke with the bishop. At the beginning, I have to say I was against using this rite, which not even they seemed to understand very well. Obviously our penitential act is one thing, their expression is another. But we continued talking, and in the end this was not during the Eucharistic celebration, and the bishop wanted the rite at any cost.”
“It was important as a sign of respect for the indigenous, but it’s also a matter of liturgical history,” Marini said. “Often rites that were not originally Christian have been ‘Christianized.’ If the indigenous have this rite, it can with time take on a Christian meaning concerning the purification of sins. Just as we use holy water, which for us recalls the waters of baptism, forgiveness of sins and the resurrection, so for them this element of smoke can have a sense of liberation and forgiveness. This is the reason for which we at the end agreed to insert this element.”

An interview with Archbishop Ranjith 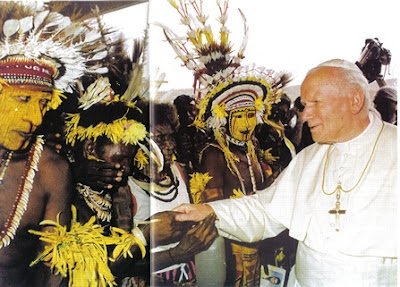 A final point I wish to make here concerns some practices introduced in mission territories, for example, in Asia, in the name of change, which are counter to its cultural heritage. In some Asian countries we see a trend to introduce Communion in the hand which is received standing. This is not at all consonant with Asian culture. The Buddhists worship prostrate on the floor with their forehead touching the ground. Moslems take off their shoes and wash their feet before entering the mosque for worship. The Hindus enter the temple bare-chested as a sign of submission. When people approach the king of Thailand or the emperor of Japan, they do so on their knees as a sign of respect. But in many Asian countries the Church has introduced practices like just a simple bow to the Blessed Sacrament instead of kneeling, standing while receiving Holy Communion, and receiving Communion on the hand. And we know that these cannot be considered practices congruent with Asian culture.
Besides, the laity whose role today is being enhanced in the Church are not even consulted when such decisions are made.
All these situations do not augur well for the Church and we need to correct these trends, if the Eucharist we celebrate is to become, as St. Ignatius of Antioch affirmed, "medicine of immortality and antidote against death" (Eph. 20).
at October 02, 2007

I often try to find the correct balance here. I know that in our hisoty this has happened. I remember reading tales of the Jesuits in Asia etc. THe early Church is a prime example.

However this term is now used just a way to get divant theology into play in many cases.

What a difficult job the new Marini has - he certainly needs our prayers.

These issues on inculturation are popping up quite a lot. It appears to me, coming from a Catholic culture that the major problem is protestantism. It has pervaded European and American soil so much I think even Catholics are unaware of it. Last week I met a Catholic English priest as opposed to an English Catholic priest. His verbal loyalties were at heart against Rome and Catholic inculturation and yet he serves the Catholic Church heroically in his priestly duties. He talks like a protestant but does the work dutifully of a Catholic priest. I wonder whether the protestant cultural nations have developed an inherrent bias to Catholic culture because their national identity was built on rejection of the Roman Catholic Church. For instance, the existence of the English nation state was achieved by rejection of Roman Catholicism. To label oneself an English national, we naturally tie our identity into a protestant construct. This position is reinforced in history curriculums at school. A bias is thus inbred into the identity.

Maybe this bias informs our ideas of catholic inculturation in general ?

I don't know how Pope John-Paul II put up with it.

Inculturation ?
Is that what they call it ?
I would call it "how not to celebrate Mass".