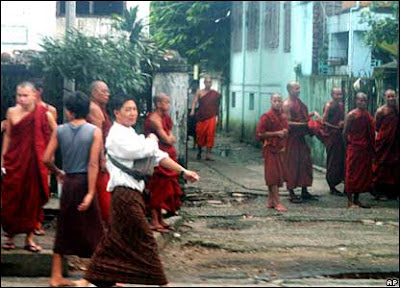 Yangon (AsiaNews) –Myanmar’s repression has become open religious persecution and the cruelty used against protesters asking for an end to the dictatorship, has gone beyond all stretches of the imagination. AsiaNews sources confirm the existence of a crematorium in the suburbs of Yangon, where soldiers burn the bodies of protesters as well as detainees gravely injured during the anti-regime demonstrations. In this way the military junta hopes to make it impossible to estimate the exact number of victims.
These same sources – anonymous for obvious security reasons – tell of a veritable persecution and absurd measures being used against the Buddhist monasteries, the starting point of the peaceful protests against the generals. The government is waging a defamatory campaign against the monks, who – according to state media – do not follow Buddha’s teachings, violate his laws and thus deserve to be punished. But as criminals, they underline, not as political prisoners. The propaganda machine meanwhile continues to propose pro government marches throughout the country: every family must “contribute” one or two members, or face a fine and up to 3 months prison, Burmese citizens explain. They add: “People take part, but refuse to shout the slogans imposed by the regime”.
The tone is one of open religious persecution. This weekend authorities called the heads of the major monasteries and ordered they be transferred outside city limits in an attempt to quell the protests. “We are worried for the fate of the monks – they say in Yangon – how will they survive outside the city, or collect alms which are their only maintenance”. The government fears most of all the activities of the young novice monks, on the frontline of marches since August. This is why it has ordered that seminaries be closed, and that all student monks return to their villages of origin.
The harsh international criticism and the threat of UN sanctions have in no way upset the Burmese generals, who have ruled the country with an iron fist for over 45 years. Yesterday fresh raids and arrests were carried out. Authorities maintain that they found arms, knives and bullets in some monasteries. According to the State newspaper “The New Light of Myanmar”, 135 monks are still being detained along with 78 civilians under interrogation. Diplomats and activists say these estimates are false and speak instead of more than 6 thousand people detained and “hundreds” dead. Eye witnesses tell AsiaNews: “Soldiers strip the arrested monks of their tunics, as if to avoid committing a sacrilege, and then during the interrogation they beat and torture them”.
at October 08, 2007

God help them! The UN surely wont; what an absolutely useless organistion.

Fr. Blake, thank you for your continued posts re: places where the freedom to exercise one's religion is not honored. We who live in countries which have freedom of religion should be grateful to Almighty God.

What is the Catholic Church in Burma doing to help the Buddhist monks?

Anon,
What did the Catholic Church in China do to help the Buddhist monks in Tibet ?

Anon.
In Karen province it suffers, in other parts of Myamar it prays and does penance I suppose.

There is very little else it can do, as the regime is not exactly enamoured by the tiny Christian, even tinier Catholic population.