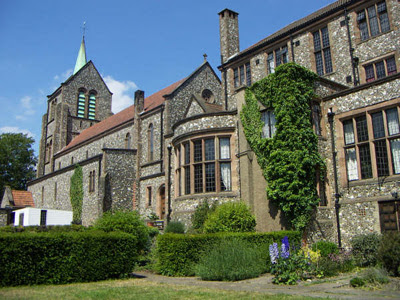 Times online
OXFORD A University of Oxford college denied yesterday that its decision to close was related to a scathing assessment in a recent university review.

The Times reported yesterday that Greyfriars Hall, one of seven theological colleges at the university, is to close at the end of the academic year. The decision by the Capuchin Franciscan Friars to withdraw from the university comes after a report by Oxford’s former Vice-Chancellor that said Greyfriars was “struggling against the odds”. Brother James Boner, Provincial Minister of the Capuchin Franciscans, denied that the review had any bearing on the closure.

The Franciscan Friars said that the decision to close was made because of a shortage of friars and money. Brother Boner said that the friars had carried out their own review and concluded that they would be unable to continue to invest in Greyfriars.

The Hall’s 34 students will be transferred to Regent’s Park, another religious college. Greyfriars was best known for its annual “bop”, or party, known as the “Monastery of Sound”.

I can't help being unsurprised if indeed Greyfriars is known for its "bop", if the we are true to the Gospel and the Church's teaching we have a little more to offer surely.
at October 27, 2007

Yet more signs of decline. These halls were founded for the studies of young religious. Lay undergraduates came in relatively recent times, partly as a back door into Oxford. With the steep decrease of vocations fewer religious are to be found in them. Campion Hall, Blackfriars and St Benet's Hall are ghosts of what they were and it would not surprise me if they, too, disappear in the years to come. Few would know they had gone as fewer still know they exist.

Father, this is a rather unfair assessment of Greyfriars based on tabloid hear-say. If anyone wants to see what the University has to say about the PPHs, it's available online. In a city full of 'bops', I have never heard of the fame of Greyfriars' 'bop', so how eponymous is that?

Can I also say to 'Anonymous' that Blackfriars has 20 religious, of which the majority are Dominicans. The others are Franciscans, Oratorians, Benedictine and a sister from the Community of the Beatitudes. All these are taught by Dominican friars or other religious.

Blackfriars was recently reviewed and the report said it was "very well run". In addition, the quality of the students was praised (not some 'back door to Oxford' nonsense), the library was deemed "exceptional" and the teaching excellent.

What we all suffer from is a lack of funding which larger colleges have. Greyfriars is disappearing partly because of the fall in vocations but also because they are running at a desperate financial loss. If our Catholic Halls do disappear, it will be because the Church does not support them through prayer and donations.

With such negativity online, is it any wonder? I do wish people would find out the TRUTH before spreading tabloid sensationalist comments.

My appologies, I did not to intend to be unfair, I merely wanted to draw attention to the closure. Though I must say I am surprised by the "bop" bit.

If the theological colleges formed good students of Catholic theology in keeping with the fullness of faith who went on to be good teachers of Catholic seminarians who went on to be good Catholic priests of English parishes who went on to sanctify the faithful through their example holiness. The theological college would be prosperous and full of life. Without the Truth we have no life. We die. Why does the Church not support Catholic Halls? The same reason that the faithful poorly support the Church in both prayer and finance, the true faith has not been taught so prayer dies. The weakened faithful see no value in supporting a Church that bleeds the life of faith from them and their children.

I wonder has anyone mentioned this to the MFVA at EWTN or the CFR (The Franciscan Friars of The Renewal)? Both I am sure might be interested in "taking over the lease" and developing their apostolates there. Neither of them suffer from a shortage of vocations.

I'm afraid the CFRs are too young and there are not many advanced degrees amnong the CFR friars since their charism is working and living with the poor and not academics. Too bad because they have several Englishmen in their community and have friaries in two English dioceses. I think Greyfriars closed 15 years too early to find a new Franciscan community to take it over. Maybe the FFI in Italy can take it over but I am not sure how many Englishmen they have in their community.

Fr John Saward and Fr Aidan Nichols OP are both Fellows of Greyfriars. Does 'benfan' wish to accuse them and others who teach there of not teaching the Catholic Faith? May I remind people that the first Lectureship in Catholic Theology after the Reformation was awarded to Fr Aidan Nichols via Greyfriars.

The Oxford PPHs all have different emphases. They are not all primarily theological colleges, or seminaries. Blackfriars happens to have the formation of (Dominican) priests and religious at its core, but that is not the case with all the others. However, all have a Christian foundation.

I think if people want to worry about poor theological formation they should write to our bishops about our seminaries. Those are paid for by the money given by the faithful. The quality of education is poor, and they are barely Catholic.

Oxford's PPHs at least can be seen to be academically challenging and soundly Catholic - and they are not paid for via a tax levied on the parishes and dioceses!

The CFRs were visitors at Greyfriars very recently but they don't have an intellectual apostolate. How can they possibly run a PPH?

In any case, Greyfriars Hall is closing but the Capuchin friars are staying in Oxford and their parish remains open. That is surely something to be thankful for.

I think we should shut down all the seminaries in the UK. The Beda in Rome should be turned into a national theological college for British seminarians i.e. a 5 year course in English with canonical recognition. Quite simple.

Our local seminary in Ushaw is 95% empty - quite absurd.

They are very stupid to do this. I can think of numerous sources for finance. The Knights of Columbus and any combination of American Traditionalists or other religious orders in combination would love to have a joint college in Oxford. How about giving it over to the Friars of the Renewal? Think outside the square!!!!

students@englishop,
If Greyfriars formed the mind of Fr. Aidan Nichols, there must be a great deal to be said for it.

I have just come across this..what a cras blog. As someone who was at Oxford several years ago and had Catholic friends at Greyfriars, Fr Ray, your comments are not only unjust but they are very ignorant of a complicated situation. Stick to what you know you are talking about!

anon 2/11/07 11:04 PM
I didn't see a letter from you in The Times after they ran this story, nor actually did I see one from the Dominican Students.
Did I miss it?

Please see the latest issue of The Tablet (December 8) and next week's issue of the Catholic Herald. The closure of Greyfriars in our view is entirely due to an ideological rejection of "elitist" education by a minority of Friars currently in control of the Capuchin Province. As you will see from the press coverage, the decision was taken behind the backs of students, fellows and alumni. The arrangement to transfer our students to Regent's Park College was agreed in secret with the University and then sprung on us all by the Provincial and his definitor and their press secretary. This was done in spite of there being a very viable business plan to relocate the Hall, backed by an eight-figure sum. This deal is still possible. As a result of publicity in the press and against a background of impending legal action, the Provincial and his definitor at last have agreed to discuss this alterative. The friars might have mothballed the licence, granted in perpetuity, for a later time or for another group of Friars Minor, but for ideological rather than logical reasons appear determined to surrender the licence and this disinherit the Franciscans and all Catholics of this country.

As regards the Bop issue. I don't think that Greyfriars Hall could really be described as especially profane in having such gatherings for students. Do you think our students will be spiritually safer in the Baptists'Regent's Park College, where alcohol is not especially favoured? We have an excellent atmosphere, strongly influenced by its and excellent academic results. It is, as I have pointed out in The Tablet, an educational jewel of the Catholic Church, and one which we are determined will not easily be dissolved, as its predecessor was in 1538.

On a more positive note, I see you say the extraordinary rite of the Mass, which is always a good sign. I would have expected such a priest to be a natural ally of those who are trying to prevent the dissolution of Greyfriars Hall.