The Pope: Hilary of Poitiers 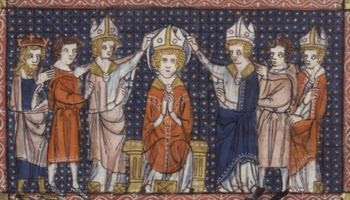 In 356, Hilary took part in the Synod of Beziers, in southern France, which he himself called ‘the synod of the false apostles’, since the synod was dominated by Arian bishops who denied the divinity of Jesus Christ.
These ‘false apostles’ asked Emperor Constantius to condemn the Bishop of Poitiers to exile. Thus, Hilary was forced to leave Gaul in the summer of 356.
Exiled to Phrygia in present-day Turkey, Hilary found himself in a religious context that was totally dominated by Arianism. But even there, his pastoral solicitude impelled him to work strenuously for the re-establishment of unity within the Church, on the basis of the correct faith formulated by the Council of Nicaea.
For this purpose, he started the draft of his most important and best-known dogmatic work, De Trinitate (On the Trinity). In it, Hilary discloses his own personal journey towards getting to know God and concerned himself with showing that the Scriptures clearly attest to the divinity of the Son and his equality with the Father - not only in the New Testament, but even in many pages of the Old Testament, in which the mystery of Christ is already foreshadowed.
Against the Arians, he insisted on the truth of the names Father and Son and developed all of his Trinitarian theology starting from the formula of Baptism given to us by the Lord himself: “In the name of the Father and the Son and the Holy Spirit.”
The Father and the Son are of the same nature. And if any passages in the New Testament might be thought to indicate that the Son is inferior to the Father, Hilary offers precise rules for avoiding such misleading interpretations: Some Scriptural texts speak of Jesus as God while others highlight his humanity. Some refer to him in his pre-existence with the Father; others take into account the state of ‘abasement’ (kenosis), his descent to human state carried through to death; still others see him in the glory of his resurrection.
In the years of exile, Hilary also wrote the Book of Synods, in which he reproduces and comments for his brother bishops of Gaul the confessions of faith and other documents of the synods convened in the East in the mid-fourth century.
Always firm in his opposition to radical Arians, St. Hilary showed a conciliatory spirit towards those who agreed to profess that the Son resembled the Father in essence, hoping, of course, to lead them towards the full faith, which teaches that beyond mere resemblance, there is a true equality of divinity between the Father and the Son.
I find this characteristic of Hilary: the spirit of conciliation that seeks to comprehend even those who have not yet arrived and helping them with great theological intelligence, to reach full faith in the true divinity of our Lord Jesus Christ.
at October 10, 2007

Father, Belloc maintains that it was the lack of zeal in stamping out arianism that led to the emergence of Islam in the East. In fact one of Mohammeds primary sources was a man under the influence of this heresy. Do you think that maybe if this Pope was a little less understanding there would be a possibility that Islam would not have emerged in the East and be dominant in Turkey today?

An interesting thought by Benfan.

It certainly was not the intention of Kemel Ataturk, the founder of modern Turkey, that Islam would retain its dominance in what was meant to be a secular state, following the demise of the Ottoman empire.

But I don't see how he could have foreseen the resurgence of a militant Islam in the late twentieth century.

In the West, Christianity, in particular Catholicism, has wielded both a spiritual and a cultural influence for centuries, especially through its patronage of the arts.

Whereas, Islam, having no representational art, remains primarily a potent spiritual force.

The decline of Christianity in the West, both spritually and culturally, along with the rise of secularism and nihilism, seems to have left a vacuum.

The "crisis of faith", which I am sure everyone has read about plenty of times, is manifested particularly in a loss of confidence in Christianity as a force in western society.

This is not surprising, since, in recent history, western Christianity seems at times almost to have lost faith in itself and in its history.

If this trend continues, while politicians seek to deny or ignore Europe's Christian heritage, then the West will be vulnerable to the influence of other spiritual forces.

(Let us remember it's all happened before.)

Nothing less than a revival of the Christian influence on society can save the situation.

But first must come the spiritual revival of Christianity itself, in particular, Catholicism.

I wonder if, in the modern world, the office of Pope has not become too politicised by the media, who are always ready to turn a pastoral insight into a political judgement, if there's a story in it.

Therefore, discreetly guided by the Pope, the revival of the Church, its self confidence, and its influence in society, would seem to rest in the hands of stong, orthodox bishops who will re-assert sound doctrine.

It seems we need a few St. Hilarys today.

Let us hope Pope Benedict can provide them.