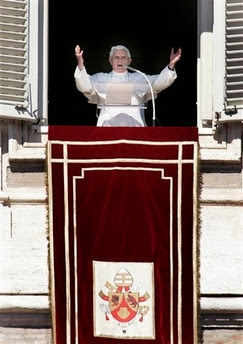 Pope Benedict XVI has called on the kidnappers of two priests abducted in Iraq to "quickly" free the two priests.
"I call on the abductors to rapidly liberate the two clerics and I reiterate that violence does not resolve the tensions," the Pope said during his traditional Sunday Angelus with pilgrims and tourists at St. Peter's Square at the Vatican.
The Pontiff urged the abductors to "quickly let the religious men go."
The Pope said the kidnapping of the two priests in the archdiocese of Mosul while attending a funeral on Saturday "rattles the consciences of all those for whom the good of the country and peace in the region is held dear," BBC News reported.
The Pontiff said he learned today that two priests from Mosul were kidnapped and threatened with death.
Reports say the priests were kidnapped by gunmen who dragged them out of their car and took them to an unidentified location, the BBC News added.
Archbishop Basile Georges Casmoussa, head of the Syrian Catholic Church in Mosul, admitted to reporters he had delayed publicizing the incident as he hoped the kidnappers would demand a ransom and release the priests.
Casmoussa, who was kidnapped in 2005 but was released a day later without ransom after the kidnappers realized his identity, said he have not been heard from the abductors, BBC News added.
In Aug. 15, 2006, a Chaldean priest was kidnapped by three masked gunmen in Baghdad.
Zenit.org. reported the abduction of Father Saad Sirop Hanna, 34, sent shock waves through the Christian community in Iraq.
Again say a prayer!
at October 14, 2007

Yes - these good and holy Priests need our prayers. Please also pray for all Christians living under the islamic veil of terror. And yet I thought that just a few days ago the combined muftis etc... of Islam were issuing olive-branches and letters of peace to the Christians? Do these guys turn a blind eye to what's going on around them. Have they no conscience or is it that they have no power? Or is there some other agenda.

Just goes to show - the religion of pieces is alive and well! That old dog will never change it's spots.

Our Lady of Fatima pray for us.