Pope says those who scandalize “little ones” warrant “terrible punishment” 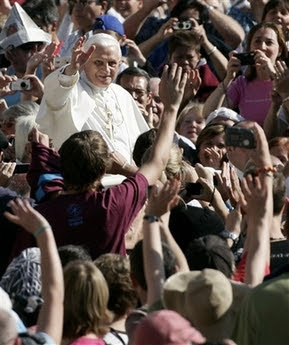 After having return to the Vatican from Castelgandolfo the Pope said at the general audience yesterday:

Pastors have “the duty to preserve the faith among the people of God” and must remember that those who scandalize even one of those “little ones” who believe in Christ, will be subjected to a “terrible punishment”. This criteria, which “is still true today” is just one of the teachings of St Cyril of Alexandria, V century “father of the Church” who was the focus of Benedict XVI’s catechesis in today’s general audience.

During the audience, Benedict XVI also invited the faithful to learn from the example of St. Francis, whose feast day falls tomorrow, and his “evangelical radicalism”. The pope underlined how by “imitating Christ, he renounced all worldly goods” and thus “showed us that we must be simple, humble and pure, because leaving this world we will be recompensed for our love”.

Over 20 thousand people were in St Peter’s square, on a decidedly spring- like day to listen to the Pope’s latest instalment in what he himself defined as “a journey, retracing the steps of the fathers of the Church”. Today’s catechesis... was dedicated to a saint revered both in the Eastern and Western Churches and proclaimed “Doctor of the Church” by Leo XIII.

Two aspects of the teachings of this Saint who was bishop of Alexandria for over 32 years starting in 412 were highlighted: the unity of Christ, God and man, and the figure of Mary as “Mother of God”. Cyril made a very significant contribution to Christology defending the divinity and humanity of Christ united in the one Lord, Christ and Son. “We will profess one Lord Jesus Christ, not only because we adore both the man and the Logos, but in order not to teach separation, because his being man is not estranged from Logos”, because “beside the Father there are not two Sons”. One Son both before and after incarnation: there was not one Son before and another after....

From the teachings of the bishop of Alexandria, the Pope also highlighted an aspect which he himself has often dwelt upon: “the Christian faith is above an encounter with Christ, a person who gives life new horizons” and who “is with us each day, until the end of all times”: a certainty in which “we must find our life’s path”.
at October 04, 2007

What a wonderful Pope!

I am reminded of the readings at Vigils from a couple of weeks ago. Those reading were from a St. Augustine sermon On Pastors.

I wonder if God will show more mercy to those who have turned away from the faith because of what they have seen, than to those who showed them such a terrible example of it.

(btw-I've mentioned you on my blog :) saying nice things of course).

White Stone,
Yes, very nice things, I am very flattered. Thank you so very kind of you!