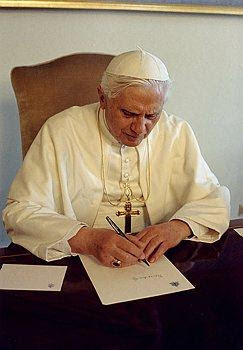 I think we could take all these rumours seriously because I suspect it is going to be about all these issues.
It strikes me that one of the great problems with the world today is a lack of hope, a lack of a sense of the future. I read recently that some primary school children had nightmares about climate change and the end of the world, wondering almost whether all the predictions of gloom will come about tomorrow.
One of the problems with secularism is that it tends to be pessimistic about the future, mankind is and then ceases to be. It is about now, mixed with our eco-pessimism, our modern apocolyptiscism the future is about spiralling decline.
Capitalism, at least in its unbridled form, sees man as having little purpose, other than making money for someone else, it demeans as much as communism, both see him as a cog in society.

The Pope's vision of Christ is that He gives meaning to humanity, the Gospel gives us a new dynamic vision of man and society, especially a vision co-operation with one another in love because as his first encyclical said Deus Caritas Est.
We can expect this Pope not so much to address abortion, for example, but the social, spiritual and economic poverty that lead to it.
at October 09, 2007

Thank you for this information - this is the first I have heard of the new encyclical. I look forward to your comments when it is made public.
Concerning pessimism in the future I have just been catching up on local news from the 'Argus' site and saw the headline 'Church to close on Sundays'. Apparently due to the shortage of priests one of the catholic churches in Worthing will have no sunday Masses, only a Saturday evening one. The headline was a gift to journalists and no doubt will be repeated on the comedy 'News' programmes. However, this is no laughing matter for the parishioners.

Of course secularism leads to pessism.

A society built without God is without hope.

If Pope Benedict's forthcoming encyclical includes this theme, I presume it will include that sentence, or words to that effect.

Yes, I know it's obvious.
But it needs repeating.
Again and again.

God help us all.

yes my children are frightened out of their wits abouit global warming...

Alan Hopes ~ can you explain why always figures so well in the betting?

I have no views but just curious.