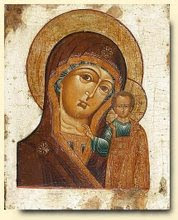 The letter of the Islamic scholars is certainly a step forward, but I am a little concerned about the idea that we worship the same God. It is too easy a phrase, one that trips off the lips of modern man. Certainly Muslims and Christian worship one, omnipotent, eternal God, the source and origin of all things.
But...
We Christians worship a God who is so great that he contradicts what we perceive as His own nature. The God who is outside of time and space through the womb of the Virgin Mary steps into time space. This is beyond the Muslim concept of God, for them God cannot humble himself. His involvement with mankind is only through an intermediary, a prophet. Though he might know all about mankind, and indeed every man, he cannot share the experiences of Man. In Jesus we see God as sharing all that man is, his birth and death, even his descent into Hell. For the Jews this was a stumbling block for the Greeks it was folly, but for Christians it is Salvation.

Even when we Christians speak about worshipping the same God I get a bit uneasy, there is always a tendency, certainly amongst Protestants to broaden the gap between God and man. Grace, for them, is something that is irresistible, therefore man's co-operation is unnecessary, hence the downplay of Mary's fiat. God "needed" her co-operation, and does "need" ours for our salvation.
The Reformers of the 16th century did everything they could to deny the efficacy of the sacraments, the continued involvement of God in the Church and in human history. They wanted to distance God from man. I find it incredibly significant that the draconian Poor Laws came into England, whipping the poor from parish to parish, on the rump of the reformation, as of course did deepening illiteracy, a greater gulf between the peasantry and the aristocracy; think of Luther's war against the peasants, and the unemployment and consequent starvation that followed the Reformation.
at October 12, 2007

The clearest and most lucid explanation I have read, Father. .

It is amazing how many Catholics do not see the problems made by the rather glib "we all worship the same God" comment.

It is plain and simple to anyone that Christians cannot be worshipping the same God as Muslims and Jews. Their denial of the Trinity and Incarnation, strikes at the two most important mysteries of the Catholic faith.

The notion that we worship the "same God" as Muslims and Jews, is responsible for a lot of false ecumenism. It is the greatest act of dishonesty towards them.

Anon.,
uh, thank you, yes, I did mean un necessary.

The characteristics of the Muslim god, are open to question and their scriptures (how can I put this delicately and without risking beheading?) - oh well, just full of lies (Ishamel not Isaac taken up the mountain with Abraham, no Trinity, no crucifixion, a bigamous genocidal maniac with a penchant for small girls is the perfect man for all time, etc etc).

The Kaaba at Mecca was an Arab polytheistic shrine long before Mahommet began the cult of his vengeful moon god there. Why on earth people swallow the 'we all worship one God' nonsense is a mystery. Then again there are plenty ofpeople who believe Islam is a religion of peace despite all the evidence to the contrary.

To suggest that people of different religions worship the "same God" sounds to me like religious indifferentism.

It is a claim which can be made without intellectual dishonesty only by secularists, nihilists and atheists.

Therefore, non-theists have nothing to contribute to the debate, however well intentioned they may be.

Ottaviani in his comment usefully mentions false ecumenism.
False ecumenism, as far as I can see, leads inevitably to religious indifferentism.
Is that what people really want ?

I'm all for trying to see the other fellow's point of view, so to speak.

But I have no control over the incompatible beliefs of different religions.

Either we all abandon what we believe in, and create a new world religion, or we all adhere to our different religious beliefs, knowing them to be antithetical and irreconcilable.

Now, show me the man who thinks these two religions are in any way compatible, and I will show you an idiot.

There are undoubtedly men of good will who seek to bring peace between different religions.

Presumably, peace and toleration are better than antagonism and conflict.

It is good if Catholics and Protestants refrain from throwing stones at each other.

But we must distinguish between ecumenism and eirenicism.

You can try to be a peacemaker. You can hold peace conferences. You can appeal for peace.
But you won't change human nature.
And you can't stop war breaking out.

Look at the Paris Conference of 1919. Did it preserve peace and stop war ?
And that was just the politicians attempting a political settlement between nations.

Attempt a peace settlement between religions which are by definition mutually antithetical, and have a long history of antagonism, and you really are setting yourself a hard task.

I don't know of any Christian nation today making war, or threatening to make war, on Muslim nations.

But you are not going to convince Muslims of that.
Islam teaches that non-Muslim nations are infidel, and therefore to be converted or destroyed.

As I understand it, Islam does not differentiate between Christian nations and secular nations.
Both are infidel.

Islamists or Islamic nations which regard the USA as "the great Satan" will never understand the concept of the separation of Church and State in the American Constitution.

By no means all Muslims, or Muslim communities, believe this for a second.
But there are plenty of militant Islamists and Islamic nations who do believe it.

Let the distinguished Islamic scholars publish their proposals for peaceful co-existence with their fellow men.

But let everyone involved avoid the intellectually dishonest claim that we all worship the "same God".

The fact that muslims don't belive in Holy Trinity doesnt mean that their God is different God. They are on the wrong way but as long as they base thir faith on God of Abraham, God of Izaak they have the same God, we have to show them how the God looks like in reality but we should show the same to Jews.