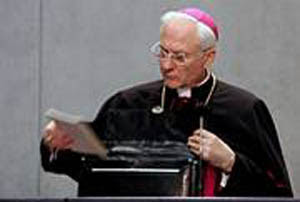 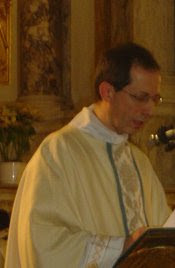 Archbishop Pietro Marini is to move from his position as Papal Master of Ceremonies and be replaced by Monsignor Guido Marini, it also reports the rumour that Cardinal Arinze the head of Congregation for Worship and the Sacraments is to be replaced by his number two Archbishop Malcolm Ranjith.

We might start to see a reform of the reform of the liturgy along the lines of the Pope's book "The Spirit of the Liturgy", exciting times.
at October 01, 2007

I hope that we shall not see the Holy Father in any more drip-dry vestments, such as those he wore recently in Austria!

What, no more Ikea vestmenmts?

Where will Cardinal Arinze be going?

Yes, well, this post brings a new meaning to the words "liturgical changes".

We all know that liturgical celebrations, here there and everywhere, have departed much too far from the prescriptions of the 1970 Missal.

It's time to give back some dignity to the liturgy.
And the best place to start is at the top.

Pope Benedict deserves better.
I hope and pray his new ceremoniere can help.

Here's to the reform of the reform.
Yes, there is a very great deal to be done.
But a slight push from the top is needed to give it momentum.