Westminster: What a hoot! 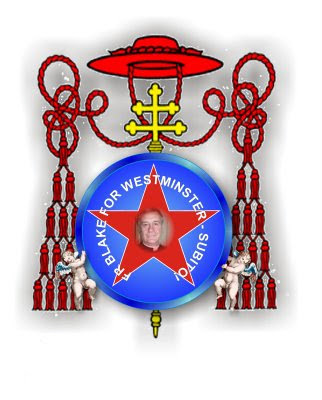 Image is courtesy of Carpe Canem, not too keen on the red star.

Looking around the blogosphere, I find I have become a "stalking horse", Carpe Canem, who has this picture up, and On the Side of Angels have taken me as their candidate for the Archdiocese of Westminster, I saw a couple of references to me on Holy Smoke. I am a bit dissappointed because I really want Venice!
Can you imagine the flying pigs?

Off the top of my head this is what I would do, this is my manifesto!

Other things I would do is just talk endlessly about Catholicism as mainstream Christianity. I think I would also appoint Damian Thompson to run Eccleston Square, and the media office and put Mulier Fortis and Daphne McCloud in charge of RE in our schools and adult formation. I think I might make sure a couple of the Fathers of the London Oratory had a prominent role on the diocese liturgy and music committes. I would start using the High Altar of the Cathedral for Mass.

Anyone who has been involved in this silliness by mentioning me in conjuction with Westminister can consider themselves tagged for the MEME: "If was the Cardinal Archbishop of Westminster I would....".
at October 17, 2007

LOL. All you've done is confirm how right we were!

Bravo Bravo Father
Now that is what I call Catholicism and a true servant of Holy Mother Church. If we could vote you'd have my vote with bells and whistles.

Woo hoo!!!! Fr Ray you get a red-cap in my books! Liturgical wimps better watch out - put those tambourines, Kum-ba-Ya hymnals and incense BBQ's in the skip.

This is what true liturgical renewal is all about! God Bless.

Fr Ray, I apologise for the double post, but I feel so strongly about this. I just hope the Bishops and Cardinal take note of these points. You've just about hit every nail squarely on the head. They are at the root of many of the most serious problems as I see them in our Holy Catholic Church in the UK.
God Bless.

How do we get this manifesto to the Congregation for Bishops?

ummmm
ok - I responded to your meme...
After reading mine they'd think you were a pussycat.
Everything which remotely resembled yours I excised - would hate to be accused of plagiarism - please remember my scenario is merely a fantasy/nightmare - if something so terrible were to ever befall the church I would probably run and hide under a desk somewhere and eat jaffa cakes...

Go Fr Ray! You have my vote too..oh i just thought of fr Tim..oh whatever! lol

I do like your manifesto. You've just got my vote. The only thing missing is immediately on consecration, dedicate the whole diocese to the Immaculate Heart of Mary...

Thank you for the vote of confidence with regard to RE teaching in schools, but I respectfully beg to know what I've done to deserve being given such a poisoned chalice!!! Hercules and the Augean Stables come to mind!

Thank you for your admirable list, Father. It's not rocket science is it? Just a willingness to tell the truth and apply Catholic remedies.

I'd love to see you and Fr Finegan (and a couple of others I won't embarass) get pointy hats. Time to harness the power of the blogosphere, I think...

"I would ban concerts in the Cathedral or anything other than worship."

Does that include Handel's Messiah or just the likes of Iron Maiden and Motörhead?

Michael,
Anything which is not directed towards God, especially the 99Names

Re encouraging people to attend daily Mass. In Australia first you would have to encourage the priests to say a Mass on the weekdays. I wonder how a priest could be so busy every weekday that he hasn't the time to say a 20 minute Mass in the morning. I sometimes think that not saying a Mass during the week is an excuse for Communion Services at which the laity, usually female, preside.

I was really surprised that my comment re the use of the cathedral for a concert hall and the sanctuary as an orchestra pit didn't make the cut on the cathedral website.

Well, you've certainly burnt your boats, Father. Mind you, I remember a priest-friend's comment upon hearing the identity of our new pope, 'God's usually more subtle than that'. Who knows? Maybe the good Lord will continue His sledge-hammer approach when it comes to Westminster?

Oooh, in my dreams!!
Your manifesto would truly revive the Church - when these things are done, vocations rise, and holiness increases everywhere...

Would just love to see Damian T at Eccleston Sq - all your appointments are wonderful. Why doesn't everyone else see this?

It's just occurred to me, if you fancy being Patriarch of Venice so much, shouldn't it be flying lions, rather than flying pigs?

Clare,
The Pope,infact both Benedict and JPii have said that priests should if possible hear confessions on Sundays before Mass and if there is another priest during Mass.

I don't do it myself, but I know I should, I'll start in Lent.

One of the problems with "good confessers", is that they often take too long, there is a difference between a good confesser and a good spiritual director. The two are quite different.

A good confesser has to learn to ask a few questions to understand what is being said. He should know what to say to encourage a penitent to want to seek forgivenss again and soon. Too much direction or interrogation, too much of a sermon from him and he breaks the bruised reed.
Confession has to be an encounter with Christ's meercy.

Do we have to be ordained to play this game, or can we all have a go?

Catholicus,
Everyone can have a go, it helps to have a blog though.
Otherwise leave a SHORT comment on what you would do here.

Hmm... He does take ages - do you think that's what puts people off? The thing is that there's not often anyone else there, so I suppose he feels he can take his time (and I'm glad he does). I take your point about confessor/spiritual director and I'm afraid that takes me to another question: does formal direction happen these days (outside seminaries, convents and monasteries, that is)? I feel I'd be taking a liberty to ask my already busy parish priest.

Bravo, Father. I wish you were Archbishop! Keep up the Good Fight!

Regarding the episcopal coat-of-arms, the red star may not be your cup of tea, but it was deemed to be more suitable than the alternative: the hammer and sickle
:-)

This won't be Father's coat-of-arms, that will be absolutely unbelievable!! ;-)

The logo is supposed to be an American-inspired election button. They often feature stars, although I'm now informed that a blue star would have been more appropriate. I chose red for the rapid preferment of Father to the Sacred College.

Check out Gem of the Ocean's bumper sticker collection.

Traditionally, saints, bishops and other worthy folks were raised to their exalted position thanks to the acclaim of the people. Why not now?

Truth be told Phil, anyone with a star, red or otherwise, wouldn't have a prayer of being elected. We'd figure he was some sort of communist!

Spot on, Father. Now we should all forward your manifesto to the Nuncio with a request that he use it as a yardstick for vetting candidates.