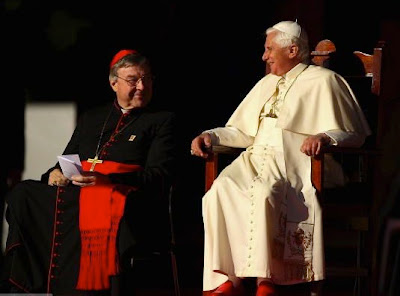 Rumours abound, and now Andrea Tounielli reports Cardinal Pell is to become Prefect for the Congegation for Bishops. Good news for England and Wales, though maybe not everyone would feel that way, certainly not those on the fringes of the Church. Expect a bit of vitriolic spitting from the Tablet and its supporters.


"While I have long been disappointed by The Tablet's persistent subversions of some Catholic teaching and mystified by the inability of the English bishops to nudge it towards a more productive line of witness."

Letter Cardinal Pell to the Tablet, May 2002.


In the last few days Benedict XVI again received in audience Cardinal George Pell, archbishop of Sydney, making official his appointment as Prefect of the Congregation for Bishops. Pell subsequently had a long conversation with his predecessor, Cardinal Giovanni Battista Re. The announcement of the move will be given over the coming weeks, but before the first of summer. Pell would be installed at the helm of the "bishop factory" for its return to full rhythm of its activity after the summer holidays. With the arrival of an Australian in the lead post of the key dicastery of the Roman Curia, that which deals which choosing bishops, Benedict XVI has completed one of the most important choices of his pontificate, one destined to shape the life of the global church for the next twenty years. It's true, in fact, that Pell isn't very young -- he'll be 70 years old in June 2011, and so has ahead of him no more than seven years -- but it's likewise true that the episcopal appointments that pass his sign-off before being placed before the pontiff will impact the life of the church for at least two decades. Papa Ratzinger yet again chooses from among the non-Italians for a key post of Curial governance, and from among the non-Italians who have no experience in the Curia (in the last 35 years, the Congregation for Bishops alternated between Italian and non-Italian heads -- from Baggio to Moreira Neves, from Gantin to Re -- but all had Curial experience). A choice certainly destined to renew and internationalize the Curia, and likewise to reinforce the hand of the Secretariat of State.

This is indeed good news for any diocese which is without a bishop... such as... Cardiff!

Also, it seems as though the Holy Father is scouting around the places where the Church is relatively 'young' (Australia and the US - mainly) for the 'key' roles that will benefit the Church for many years to come!

Paolo Rodari (Palazzo Apostolico blog) confirms this, saying that all that remains is the official announcement.

A good move by the Holy Father, I'd say. With Pell and Ab. Burke having a say in future episcopal appointments, there is much reason for optimism!