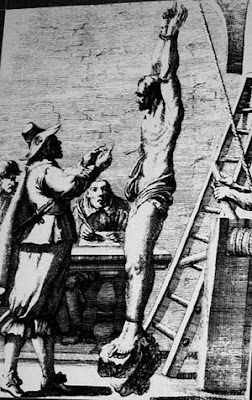 It is the feast of the English and Welsh Martyrs today.

It is difficult for us to imagine the tensions of mistrust that must have flecked the lives of those who adhered to the True Faith. Those priests who landed in England didn't know if the last Mass they celebrated would indeed be their last, some never actually got to say Mass in England they were arrested on the beach on which they landed, others were betrayed by those to whom they gave the sacraments, or even by those who gave them hospitality, even by their fellow priests.

It was only Christ and his saints who could be trusted.
There is an autobiographical account of the torture of Fr Gerard here. Gerard survived and kept his mouth shut, others did not. For those facing torture trust in one's own resistance must have been doubtful and trust in God's grace must have been a minute to minute matter.

When Jesus calls the disciples to follow him, he doesn't show them their end, the invitation is to day to day, a minute to minute affair. When Jesus speaks about Peter's death at the end of John's Gospel, he speaks about Peter having a belt put around him and being led in ways he would rather not go. Being led in this way means the follower literally follows step by step, moment by moment.

"Lord for tomorrow and its needs, I do not pray ..."
Posted by Fr Ray Blake

“With God’s help I shall never do anything which is unjust or act against my conscience or the Catholic faith. You have me in your power. You can do with me what God allows you to do—more you cannot do.”

I wonder how differently history might have run if he had added:

"But you yourselves and the King are in God's power and are under Oath faithfully to serve Our Lord Jesus Christ according to the true Religion and not otherwise. I state on my Oath the truth of the Catholic Religion and of the jurisdiction in this Realm of the Bishop of Rome.

"Therefore, you and the King are invited to submit this Realm of England to the Catholic Religion and to communion with the Bishop of Rome, and so escape the displeasure of the Lord of Hosts.

"In the sole alternative, you are foresworn and liable to face the vengeance of Him who assures us that He will not leave unpunished those who misuse His Name."

Father, I'm reading about the English Deformation at the moment. I am wondering if Catherine of Aragon should not be considered a martyr for the Faith too. She was a very holy woman who defended the Sacrament of marriage and the rights of Papal authority. She showed heroic love for her husband despite his betrayal of her. Her courage to insist on justice and truth in the face of death seems heroic to me. Any thoughts?

Dear Father Blake,
In your article you speak only of priests. This is probably just an oversight but it does give the impression that the martyrs were among the clergy only. In his canonisation address for Forty Martyrs of England and Wales (25 October 1970) Pope Paul VI said:
"So we find among these Forty Holy Martyrs priests, secular and regular, religious of different orders and grades; and we have, amongst the laity, men and women of the highest nobility and those who rank as ordinary, married women and mothers of families. What unites them all is that interior quality of unshakeable loyalty to the vocation given them by God - the sacrifice of their lives as a loving response to that call."

Later in his homily he said: "The Church and the world of today have a consummate need of men and women like these in every state and walk of life: priests, religious and layfolk. It is only persons of this calibre, this holiness, who are capable of transforming our tormented world, of giving it that peace, that truly spiritual and Christian direction which every man in his heart so longs for, even when he is unaware of it: the peace and true direction which we all need so much."

How true these words are - the Church is under attack as never before and is in desperate need of men and women of great calibre and holiness to transform our world that is even more tormented than when Pope Paul uttered these words in 1970.

I wonder if you would be kind enough to publish this as "Anonymous"- I fear (such are the times) that it could be identified. If not, please ignore but keep up the prayers.

Please pray for the communty of Benedictines in London, for courage and strength and hope. Satan indeed is pursuing them.

I have understood through my childhood catechism that we should not equate lay people and their heroic or heretic behaviors in the same breath as Priests...

If we die a martyr, our dust returns to the ground.

If a Priest is murdered, millions of souls are murdered along with him, because he was not allowed his Holy Ministry to fruition. The evil effects through generations.

In explaining this, my Priest and Confessor related to me that there was supposed to be a Holy Father born that would have averted the Freemason hi-jacking of Vatican Council II. His mother aborted him.

May God our Lord in His infinite and supreme goodness be pleased to give us His abundant grace, that we may know His most holy will, and entirely fulfill it.

Growing up in Ireland I learned about the persecution of Catholics there but really had no idea that the persecution in England and Wales was probably worse.(Nor did I have any idea that the poor in Britain, of all faith backgrounds, were as oppressed as the poor in Ireland, eg, the 'convicts' deported to Australia). We studied Evelyn Waugh's 'Edmund Campion' in our first year in the seminary, 1961-62.

While based in Britain from 2000 till 2002 doing mission appeals for the Columbans I was struck by the lists of martyrs officially recognised by the Church, ie, saints, blesseds and venerables, that I found in so many churches and sacristies. The Archdiocese of Birmingham, as I recall, has more than 80 such associated with it and the Diocese of Lancaster, where I did many appeals in 2001, has a similar number.

May the martyrs of England and Wales obtain the grace of a renewal of faith for all in those countries.

Goodness knows what they were studying in the first year by 1981-1982 but I bet it wasn't Evelyn Waugh!

Father Sean, Irish Catholics were never singled out for persecution under Henry VIII or Elizabeth I, though the penal laws in Ireland were not identical to the ones in England.

The difference between the two countries was that the Irish generally remained firm in their Catholic faith, while in England there was a small minority of Catholics, and another of Protestants, who were willing if necessary to die for their beliefs.

The majority were willing to believe as the King told them to.