Fulham, Richborough and Ebbsfleet in Rome 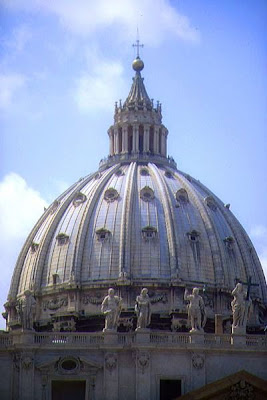 The Rt Rev John Broadhurst, the Rt Rev Keith Newton and the Rt Rev Andrew Burnham, the Anglican bishops of Fulham, Richborough and Ebbsfleet have been off to Rome. There has been surprised expressed that Archbishop Nichols was unaware of this visit. No-one has said what this meeting was about or who it was with.

Some have interpreted it as a snub to the English hierarchy, it could be that or more likely it could just part of a series of meetings to inform the Holy See and to clarify the details of a future Ordinariate in England and Wales.

Some have suggested that the news of the meeting was leaked in a rather underhanded way to strengthen the Anglo-Catholic hand in the negotiations over provision for those who will not accept women bishops but will remain in the Anglican Communion. It could be that but then it could simply be that it is impossible to keep the presence of three Anglican bishops in Rome. All Saints in the Via del Babuino, Rome's Anglican church is a hotbed of gossip in the Eternal City, Mickens and Willey et al don't need to bug the place, if news doesn't filter out from there the are plenty of other sources.

It is a pity that none of these Anglican Bishops are users of the Book of Common Prayer but instead use the Ordinary Roman rite. How are they distincly Anglican except in origin? What indeed could they add , except in numbers, to what is already in the Catholic Church.

They are in distinct contrast to the Traditional Anglican Communion, the members of which had the courage to leave the Church of England over twenty years ago, who retain most of the Book of Common Prayer, and who worship in the stately English of Thomas Cranmer. It was they who initiated the process which led to Anglicanorum Coetibus by petitioning the Holy See for a doctrinal and sacramental union which would respect their Anglican culture.

Bishop Burnham told us at the Newman Society last term that he has claustrophobia and can't fly - getting to Rome for him is quite a business!

Just when in the USA Bishop Daniel Herzhog has swam back across the Tiber and returned to the Episcopal Church.

The Tiber has a two-way cross current with only one direction getting the attention.

People who can use stately English to destroy the Catholic Faith of a Nation,have much to answer for.

Mr Walton - the people of whom you speak are all dead and like other sinners have no doubt already answered to the Almighty.