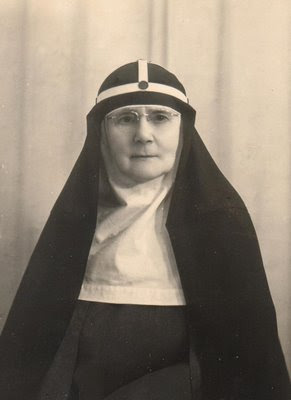 Simon Caldwell was kind enough to send me an unedited copy of his article in today's Daily Telegraph - it is not on-line:

Two nuns from London are to be placed on the road to sainthood by Pope Benedict XVI, it emerged yesterday.

The Pontiff will declare Sister Katherine Flanagan and Mother Riccarda Beauchamp Hambrough to be ‘Servants of God’ – the first stage on the way to becoming a saint – in a ceremony at the Vatican on July 5.

Mother Riccarda is considered a candidate partly because she helped to save the lives of about 60 Jews from the Nazis by smuggling them into her Rome convent, the Casa di Santa Brigida, in the autumn of 1943.

Sister Katherine, known as ‘Kitty’, helped to spread her Bridgettine order by opening convents throughout Europe.

The order is nicknamed the ‘hot-cross bun nuns’ because of the distinctive cross covering the top of their wimples.

Kitty, a dressmaker, was just 19 years old when she left Wimbledon for Rome with the aim of becoming a Bridgettine nun.

A year later she was followed by the future Mother Riccarda – born Madaleina Catherine in London in 1887 – who joined the same order at the age of 24.

But while Kitty went on to become the first prioress of newly-opened convents in Iver Heath Buckinghamshire; Lugano, Switzerland, and Vadstena, Sweden, where she died in 1941.

Mother Riccarda, however, became deputy of the order and remained at the mother house in Rome.

During the Second World War she initially worked with refugees and casualties. But when in October 1943 the SS began to round up the city’s Jews for deportation to the gas chambers of Auschwitz she began to smuggle them into her convent.

Yad Vashem has already honoured the work of the sisters by naming their superior, Blessed Mary Elizabeth Hasselblad, as a righteous gentile. It is seeking testimonies from Holocaust survivors about Mother Riccarda’s activities.

Riccarda was baptised as a child in St Mary Magdalene Church in Brighton after her parents, Windsor and Louise, converted from Anglicanism to the Catholic faith.

Father Ray Blake, the parish priest, yesterday spoke of his delight at the prospect of having a saint associated with the church.

‘I suppose it means we are going to have to start thinking about a shrine for her,’ he said.

‘Brighton needs tons of saints but more importantly this is excellent for Catholic-Jewish relations.

‘Her canonisation would demonstrate what many Catholics who didn’t hit the news were actually doing in the Second World War.

‘They were trying to live Christian lives in very fraught times often at great risk to themselves.

‘There are Poles in our community whose parents were shot because they were hiding Jews, priests or gypsies or whatever,’ he added. ‘It was an extraordinary time of a lot of heroism and a lot of sin – just like today really.’

The first step toward sainthood will involve the examination of the lives of the two women for evidence of ‘heroic virtue’, before two miracles will be sought first for their beatification and then to canonise them as saints.

The last women British women were canonised in 1970 when Pope Paul VI named Margaret Clitherow, Anne Line and Margaret Ward among 40 English and Welsh saints who died as martyrs in the Protestant Reformation.

Britain next saint is likely to be Cardinal John Henry Newman who will be beatified at Coventry Airport by Pope Benedict on September 19.

Elisa Famiglietti, the vicar general of the Bridgettines, said last year that the opening of Mother Riccarda’s cause for sainthood would be ‘a great honour for England’.

She said: ‘Mother Riccarda was a wonderful woman. I knew her well and met her in 1954 and was with her up until her death in 1966.

‘She was an angel who did so much to help our Jewish brothers during the war and I know they want to honour her as well.

‘Mother Riccarda was humble and discreet and she provided safety and charity for our Jewish brothers during the war but she very rarely spoke about it.

‘What I always remember about her is that despite living for so long in Italy she never forgot she was English and always spoke English to us.’

Riccarda finally became the head of the order and died in Rome at the age of 79. Her body lies in the convent where she hid people from persecution.

Kitty Flanagan body is in the Swedish convent where she died.

Born in Clerkenwell, London, in July 1892, Kitty was the eldest of four children of William, a solicitor’s clerk who became a major in the British Army in the First World War and Florence, nee Murray.

What I find fascinating is that Mother and her sisters hid not only Jews but Communists and later their Facist persecutors, in fact their house was open to anyone in search of a refuge, anyone for whom the mob was baying. That is Christian hospitality.
Which group or individuals should they be sheltering today?
at May 22, 2010

Also, the homeless, asylum seekers and mothers of down syndrome babies bullied into aborting their children by murderous medical professionals.

That is wonderful news, Father! Will be praying for her cause.

But I still think she looks as though she ought to be on the Bayeux Tapestry.

I hope that this will be a blessing for your Parish, and dare I say for the physical foundation of the Church building.

Perhaps they should shelter Catholics and protestants hounded from their jobs by local government equality ministers.

In an age when the gassing of the Jews is denied, and the shoah diminished, Mother Riccarda is a reminder of the enormity of what happened.

I must confess that Mother Riccarda struck me, from her photo, as being a rather 'forbidding' person and I wasn't quite sure why you had it as a permanent fixture on your blog. Now I know why. This is a wonderfully uplifting story.

A telling juxtaposition to the previous post.
The difference between subsuming self in humility and obedience and proclaiming self as the overriding belief.

"Yad Vashem has already honoured the work of the sisters by naming their superior, Blessed Mary Elizabeth Hasselblad, as a righteous gentile."

It would be interesting to know how many Catholics were named as Righteous Gentiles because of their activities in saving Jewish lives during WW2. And how this compares with people from other faiths and denominations.