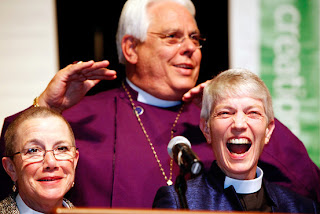 While Congregation for Christian Unity privately seethes in Rome over the ordination in the Anglican Centre there of an Old Catholic priestess. In the US the "first openly lesbian bishop" has been ordained. The beginning of the rite can be seen here.  It consists of various native Americans doing there thing, ending up with a "smudging rite" an exorcism/blessing of the lady to be consecrated and her principle consecrator.
These preparatory ceremonies seems to show the real confusion over what the American shoot of the Anglican Church actually believes. It certainly doesn't seem to believe in the uniqueness of Jesus Christ, in scripture or Tradition or in the efficacy of its own sacraments and prayers.
A friend, a former Anglican says, "I am not quite sure what Anglicans are supposed to believe in, everything can be fudged really, except, now, the belief in the ordination of women, that appears to be sole, undisputed belief of Anglicanism"
at May 22, 2010

I wonder when they will stop pretending to be Christians.

The gates off hell will not prevail against the Church founded on Peter.

A church not founded on Peter doesn't have that guarantee.

Catholic ceremonies in Australia have for some years now, and for Pope John Paul II I believe, have indigenous smoking rites.

Oh dear, another "Lesbian" bishop. Isn't it time for the real bishop of Lesbos to assert his position?

The present incumbent is His Eminence Metropolitan Iakovos III of Mytiline

@Sharon
" Catholic ceremonies in Australia have for some years now, and for Pope John Paul II I believe, have indigenous smoking rites."

We have those but after Mass. The PP's favourite is Camel.

I heard that the Archbishop of Southwark's favourite saint was St Bruno.

Why do we have to know that it's a Lesbian,I have never really known whether lesbianism is sinful or not but if it is a Mortal Sin then why should it be promoted by a Bishop of a Christian Sect?

This is the sort of thing that gets Fundamental Islamists hot under the collar and they are getting more and more convinced that all Christians must be Infidel to allow this nonsense.

Anglicanism was born under a false premise and will destroy itself.