THE FRIENDS OF JESUS: A NEW BOOK FOR CHILDREN BY THE POPE 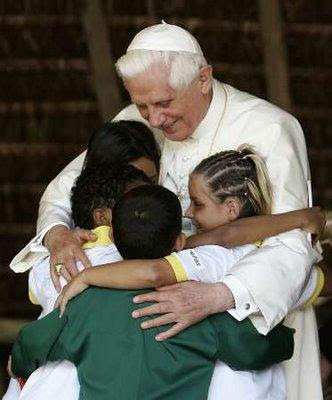 (VIS) "The Friends of Jesus" is the title of a new book for children by Benedict XVI in which he recounts the story of the twelve Apostles and St. Paul.
The book, forty-eight pages long and illustrated by the Italian artist Franco Vignazia, has been published by the publishing house San Giuliano Milanese. It brings together a number of passages from the Pope's catecheses in his Wednesday general audiences, according to the "Osservatore Romano" newspaper.

The prologue is by the Spanish priest Fr. Julian Carron, president of the Fraternity of Communion and Liberation.

"One upon a time there was a small group of men who, one day two thousand years ago, met a young man who walked the roads of Galilee. Each had his own job and family but, in an instant, their lives changed. They were called Andrew and John, Peter, Matthew, Thomas, etc. They were twelve and we know them today as the 'Apostles'. ... In Jerusalem at that time everyone knew that they were Jesus' 'friends'. ... Later they were joined by St. Paul ... who from being a persecutor of Christians became the greatest witness to Jesus", writes Fr. Carron.

Fr. Carron likewise explains that in this work Benedict XVI "takes us by the hand and accompanies us as we discover who Jesus' first companions were, how they met Him and were conquered by Him to the point that they never abandoned Him".
at July 22, 2010

And this is exactly what our Lovely Holy Father is doing for us;
taking us by the hand,in order to bring us closer to Our Blessed Lord & His Holy Church.
VIVAT.
D.Aidan.O.S.B.

I'd love to get it for my son. Is it available online?