Why don't the Orthodox and Copts do it? 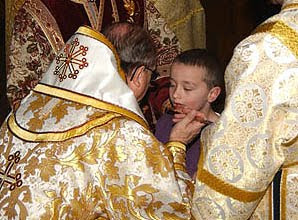 In a discussion earlier on this blog someone asked the question: why don't the Orthodox who broke from us in eleventh century to give Holy Communion in the hand and why don't the Copts who broke away in the first millenium give it in the hand either?
Why is it that only the Protestant groups who broke away in the 16th who do it?
What lead all the ancient Churches to abandon the reception of Communion in the hand?
Just asking!
at July 31, 2010

Slightly off topic, but when I went to Mass in Cairo recently the priest dipped the Host into the chalice (which was sitting under a paten with a hole in the middle) and then gave it on the tongue. So no one received it in the hand. I wonder if that was in response to the Coptic/Orthodox practice?

In Brugge you take the Host in your hand and take it round to a cup and dip it the Blood.

The Host is a bit thicker than normal to allow this to happen without mishap.

Not sure if this is in all the churches but I think i was in the main one.

"Why don't the Orthodox and Copts do it?"

I guess different revolts have different emphasis and propels the revolter down different paths. The protestant revolt was a revolt against doctrine which would have to be reflected in a different liturgy and practise. You cannot treat as sacred something that is not. A protestant is quite right to throw around the baps because they are just that, baps.No point in pretending is there.

As regards the orthodox and copts I really don't know enough to comment.

Fr Raven (no relation), has a good post on this question: http://tradwatch.blogspot.com/2010/06/somewhere-if-i-dug-through-enough-books.html

Another way of putting it would be "Why do the Latins and their Protestant offspring end up liturgically dysfunctional?"

It's not rocket science. When you cease to be Orthodox (right-worshipping), you become heterodox.

As I understand it, both East and West moved away from giving Holy Communion in the hand in order to prevent superstitious abuse of the Sacred Species. If It gets put in your mouth (either on a spoon with intinction, or under one kind directly on the tongue), you can't slip It into your pocket to bury It in the fields to ensure a good crop, or hang It over a window to keep out evil spirits. I seem to remember reading (a long time ago, so I may be misremembering) that Holy Communion in the hand had all but died out by the 10th Century.

Oops, forgot to add that there is archaeological evidence to suggest that Communion Spoons may well have been in use in the British Isles before the 10th Century. The church plate discovered in Shetland in the early part of the 20th Century contains such an item, dating from around 800AD.

Nickbris- you describe 'self intinction' - this is seen to be a liturgical abuse in INAESTIMABILE DONUM—Instruction Concerning Worship Of The Eucharistic Mystery. I quote, "It is not permitted that the faithful should themselves pick up the consecrated bread".

Fr Ray Blake, with respect, your statement regarding the schism is historically incorrect. In 1054, Roman legates traveled to Patriarch of Constantinople Michael Cerularius to deny him the title Ecumenical Patriarch and to insist that he recognize the Church of Rome's claim to be the head and mother of the churches. Cerularius refused. The leader of the Latin contingent, Cardinal Humbert, excommunicated Cerularius, while Cerularius in return excommunicated Cardinal Humbert and other legates.

Acerace,
I think we have different theology of Church.
I don't think I cited a date, '54 was part of a process but that it is not the subject of this post!

Nickbris, Hyppolitus is correct in describing self-intinction as an abuse. The ordinary Catholic in the pews is not an Ordinary Minister of the Eucharist and because of that they may not administer Holy Communion to themselves. They have to have the Sacred Species given to them. To take it for themselves is an abuse as Hyppolitus writes.
JARay

On a related issue is the matter of communion under both kinds. This was a subject of dispute with the Hussites.

Is Christ received only partially if communion takes place under one kind alone? No. But that could be the impression received if it is routinely distributed under both kinds.

Gemoftheocean got the bowl rolling (and my blood boiling) I really wish she would attempt answer the question which is the title of this string. This is not first time Gem has departed a discussion when challenged.

Completing a thought can be hygeinic!

Here's a hypothesis: The Armenians, and Nestorians who split with us after early Councils in the 400's, dropped the heretofore 'widespread' practice of hand Communion so they could be like Roman Catholics who would do the same thing in the year 1000 'or so'! The Orthodox, who split in the 1000's were also hand Communion people, but they saw us ban it and so they banned it too so they could be more like us!

I have to accept this joke as truth, if I am to swallow the lie that Gem and the USCCB liturgical experts assure us is true!


Here is a string from Gem and me from way back that Gem decided to drop....
http://kneelingcatholic.blogspot.com/2009/07/dear-gem.html

Maybe somebody ought to go over & tell the Belgians.

I am an Eastern Orthodox Christian, and to my limited knowledge Eucharist given in the hand has never been a widespread or accepted practice in the Church. Certainly we Orthodox – Eastern or Oriental - would be horrified at the thought nowadays. St. Basil the Great in the 4th Century wrote very clearly that the practice was only justified during times of persecution, presumably because priests might not be available to distribute the Eucharist in person. The text implies that to receive in the hand under other circumstances, outside of persecution, would be a grave fault. Other references from the first millennium, including references from the Western Church, support the conclusion that the normal and accepted manner of reception of the Holy Eucharist was in the mouth, given by a spoon, as it is still today in the East, and in Eastern rites in communion with the Roman Catholics.

It appears that only St. Cyril of Jerusalem (also 4th Century) mentions reception in the hand as if it might be an accepted and legitimate practice, and this is the passage that is typically trotted out as evidence from this early period.

In other words, to answer the question, my belief is that the Eastern churches didn’t “abandon” the practice. I think the likelihood is that they never particularly condoned it, but allowed it as a necessary evil during times of extreme persecution. It became unnecessary after the Peace of Constantine in 313, as another contemporary reference appears to indicate.

Here is a link with further information. http://www.catholic-pages.com/mass/inhand.asp
I’m sorry I don’t have more information from the Orthodox point of view. It has never occurred to me that such a practice might have been legitimate at any time in the history of the Church. I will certainly look deeper into the history of the practice, particularly its history in our Church.

The piece often quoted to St Cyril of Jerusalem, to my understanding wasn't written by him (the Hand communion part), but by his successor John

Short answer, it's an apostolic tradition

Jacobi,
Blogger doesn't allow me to do "part" comments.

The Orthodox and Eastern Rite Catholics and Copts don't do it, because they prefer the unhygenic method of putting it on the spoon.

As far as Communion on the tongue goes...I've nothing against, but I don't go into a hissy fit about Communion in the hand, given it was done that way for the first millenium until the priests got grabby and started building Abbeys and Churches not even leaving space for Joe Sixpack and other hoi polloi. The started shutting Joe Six out when they decided Joe Six wasn't worthy to hear the Canon, and they grabbed virtually ALL prayers and responses for themselves and favored people to the extent that they often didn't want the pew sitter to know what was said. I like the TLM very much, thank you....but I hate the "keep it from the simpletons" crowd amongst them.

Personally, I like intinction (not self-intinction, either] and I think it's a nice compromise.

Any special reason why certain people are allowed to call certain other people liars and never get called on their BS?

I am so sick to death of certain traddies who think they are holier than thou just because of they way they recieve Communion. It's the nastiest part of the traddie community.

It appears that only St. Cyril of Jerusalem (also 4th Century) mentions reception in the hand as if it might be an accepted and legitimate practice.
The passage (whoever wrote it) is far more strongly worded than you suggest. Here it is:
In approaching therefore, come not with your wrists extended, or your fingers spread; but make your left hand a throne for the right, as for that which is to receive a King. And having hollowed your palm, receive the Body of Christ, saying over it, Amen. So then after having carefully hallowed your eyes by the touch of the Holy Body, partake of it; giving heed lest you lose any portion thereof ; for whatever you lose, is evidently a loss to you as it were from one of your own members. For tell me, if any one gave you grains of gold, would you not hold them with all carefulness, being on your guard against losing any of them, and suffering loss? Will you not then much more carefully keep watch, that not a crumb fall from you of what is more precious than gold and precious stones?
(It is the normal way Anglicans receive the Eucharist, though that won't cut any ice with some people.)