Year of the Eucharist in Colombo 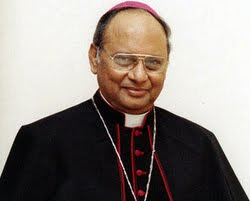 Archbishop Ranjith of Colombo, Sri Lanka who until last year was the number two at the Congregation for Worship in practical terms was the closest co-operator with Pope Benedict on matters liturgical.
A friend recently travelled to his diocese and was struck by the reverence of those who were at Mass. He also had a fifteen minute interview with the Archbishop which turned into an hour long chat ending with my friend, a doctor, being invited to return to Sri Lanka to address the Episcopal Conference on Justice and Health issues.
The two poles of the Archbishop's ministry are very definitely liturgy and justice. Rorate Caeli reports that the Archbishop has announced a Year of Liturgy, the article is entitled "We cannot tolerate liturgical errors." The exciting thing is that the Archbishop begins his letter by speaking of the liturgy in terms of a fount of charity and service.


[W]e need to break ourselves for others, and be pressed and crushed for justice and peace simultaneously as we believe and celebrate this most holy Sacrament. Hence, I very earnestly request all priests, religious and the laity to combine devotion with animation to show our love for the poor and the less fortunate people in our society by engaging in works of corporal mercy. Let our love extend not only to the poor people, but also towards mother nature so that our Eucharistic spirituality would incorporate also an eco-spirituality.

In a society recovering from the dis-communion of an ethically based civil war, re-establishing the centrality of Christ and the Tradition of his Church to the prayer life of the Church seems very important.
at July 29, 2010

I hope a copy of this reaches every diocese in the world.