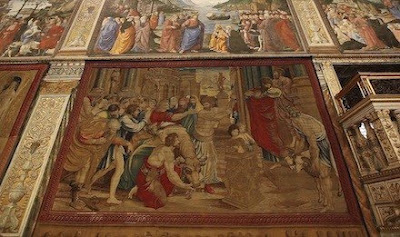 I am very pleased that the seven Raphael tapestries from the Sistine Chapel are going to be displayed at the Victoria and Albert Museum during the Pope's visit, to be displayed with the original cartoons that the V&A owns.
However Anna Arco reports there was going to be an even more spectacular exhibition of items from the Vatican Museum. Apparently the Pope was in favour, as was the Vatican Museum, the Royal Academy which would have hosted the event was over the moon, and then the plug was pulled - by someone. Anna doesn't suggest a name for the plug puller, we can only guess.
Am I becoming neurotic in thinking that some people, possibly even with the Church, are actually against this visit and doing everything they can to derail it? Maybe a Catholic Voice, I haven't heard anything of them lately, have you? might be able to explain. Certainly the men on the square in head office don't give the impression of excitement for the coming of "Christ's Vicar on earth" to our shores.
I was talking to a small group of parish priests recently they were quite angry with the bishop's, I think really they meant Ecclesdon Square's, rather ad hoc planning and the apparent lack of enthusiasm. Maybe Jack Valero needs to start spinning ad intra, lest PPs up and down the country start questioning publicly whether the Pope and the faithful are being well served.
at July 21, 2010

Hehe Fr Ray! "on the square" you are not suggesting funny handshakes and aprons are you?

Father, I looked, but in vain, for the name you said was suggested by Anna Arco. There isn't even a hint.

A fortnight's notice to the parishes (well, those up here anyway) to get volunteers for 'banner duty', the same for allocations of places at the various events to be taken up - and all at a time when a good number of people and parish priests are away.

Sad to say, it seems that the whole thing is being engineered to make it difficult for people to be present with the Holy Father.

" Anna does suggest a name for the plug puller"

Does she? Where? I read the piece but couldn't find that.
Is the whole article available online? It seems to end rather abruptly. I just wondered if what I was reading wasn't complete.

The way the preparations for the Popes visit have played out has been a real eye opener for me.
I feel a little crushed that, so far, it seems that my optimism has not been rewarded.
The church hierarchy seem so, well, 'tepid' about the whole business.
Thank goodness for the internet though, it's good to know I am not alone in longing to offer the warmest of hearty welcomes to our beloved Pope.

Just because conspiracy theories border on the absurd does not mean that there isn't a conspiracy going on.

Your reference to 'men on the square' in head office.

Are you saying they're Freemasons?

Sorry,
"Annma does suggest a name" should have read "doesn't", oops!

On the square - Ecclesdon Square of course!

Happy Feast Day Father
And safe journey to any off to Lourdes with A&B.

"On the square"? It is a serious, shocking and preposterous allegation. Yet one wonders. I have been wondering for a long time. It is of course the best way to be accepted in British life, get to meet all the influential people in politics, the professions, civil service etc. It makes one the ultimate insider.

And any cleric who was on the square would want to rationalise the liturgy, remove any sense of mystery, etc. Which is far from making an accusation. There are lots of other possible explanations for the de-mystifying tendency. It is more a question lurking in the back of the mind.

I went to mass in the cathedral at Riga at 8-00 am this morning. It was celebrated by the bishop himself, I only knew this because he was wearing his zuchetto. Well attended, he said mass in Latvian, ad orientem. There has apparently never been a front-facing altar. Everyone received communion kneeling, on the tongue, with a communion plate in use.

A priest was on duty for half an hour beforehand to hear confessions. All of which is more like what should be a normal state of affairs.

I'm sorry, Father : but I think you give too much credit to certain people. I don't think they're enthusiastica about the Holy Father's visit, and indeed I am sure that there are a good many who would love to see it cancelled; but in general terms I think that it's simply a function of the fact that they don't have the organisational nous to put on a convincing p***-up in a brewery.

In my diocese, and the neighbouring one, attendance at the Birmingham location is being limited to one coachload per deanary. If this policy applies nationally, I calculate that that amounts to about 15,000 people.

No system for booking a place has been instituted and the priest has now gone away on holiday. His last words were "I don't it is practical to do anythimg".

The whole business is a shambles from beginning to end.

Eight weeks to go and only the vaguest information about arrangements. As I recall it, when JP2 was due everything was in place by this stage.

Glad you meant Eccleston Square, Father. I was more than a little startled when I read your post!
Allowing for the lacklustre support for the Pope's visit by our hierarchy, I am not sure I would pin the blame in that direction.
We know how slowly the Vatican moves, so to get them to react in an instant from selecting treasures to getting them over here was, perhaps, over-optimistic.
Also, the Vatican exhibition was a sort of fill-in when another display fell through. I don't think I'd be very flattered were I head of the Vatican museum.
And there is another dimension to be considered. With all the anti-Pope/Catholic feeling swirling around, plus accusations of worshipping graven images, who could be sure there wouldn't be an attampt at vandalising one of the artefacts?

"In my diocese, and the neighbouring one, attendance at the Birmingham location is being limited to one coachload per deanary. If this policy applies nationally, I calculate that that amounts to about 15,000 people."

Sounds about right most of the tickets are probably going to "VIP's".

But no reason, surely, why the British Library couldn't put on a small display with a loan or two from the Vatican Library of MSS from this country, demonstrating early links with Rome?