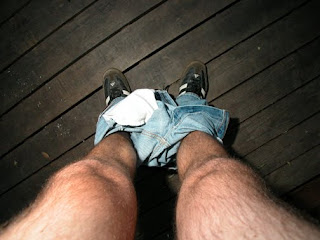 A few days ago I was a bit saddened to hear that the new Lord Mayor of Leicester, Colin Hall, had stopped prayers at Council meetings, he had said something about them being "irrelevant".
Then I heard on the news some midlands had issue a public appology after a formal visit to the town library addressing a gathering of children from local schools - because his trousers had fallen down.
According to Red Maria they are the one and the same, Mr Colin Hall!

I don't even want to ask exactly who that is in this particular photograph used to illustrate this post.

Fr. Ray, I'm relieved. Those sneakers, for one thing, are butt ugly!

Comedian Dave Allen once said he was glad God had a sense of humour. "If he hasn't, I'm in trouble" he said.

One can only hope that the mayor is not some exhibitionist. Surely he would have noticed the slip long before the drop!

Are trousers all that he is lacking? He certainly seems in some respects to lack support.

The "San Culotte" are alive & well in Leicester

Well that's a take. Usually people hit their stride well into their term of office ,and not usually losing them. His looks-only a mother could love

That is what is bound to happen sooner or later when people wear their trousers in that ultra-low-hung style.