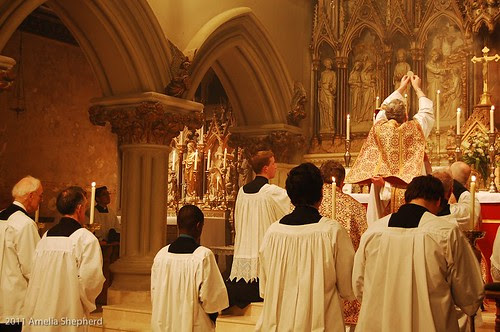 I am a bit anxious about our parish's liturgical future, we are loosing our Master of Ceremonies, he believes God is calling him to the religious life, I do too, or at least to be more accurate I believe that he is called to offer himself, because ultimately the Church will do the calling. Vocation is ultimately the objective call of the Church not the subjective opinion of the individual. Another of our servers, a university student studying here has already gone to off to the continent to do the same thing along with his younger brother. Pray for all three.

I am not sure how much influence I have had, not much I suspect but maybe they were suddenly struck by the thought, as I was during a particularly dull and painful Good Friday Liturgy and sermon, "If God can call this man as a source of Grace, he might just be able to use me to do the same." Good priests attract vocations but so, thank God, do the mediocre.

In both cases the young men concerned have been attracted more by the old rite than the new. Both were more than capable of guiding me and our servers through a High Mass; unless God in his wonderous providence sends us a new Master of Ceremonies we are going to be a bit stuck but if he wants it, he will do something about it.

Talking to a lay friend involved in seminary selection in one of the Metropolitan dioceses, he said he estimated half those of those who now apply to a seminary have had some involvement with the Traditional Mass. It would perhaps not be too much to speculate that those diocese who have a policy antagonistic towards the Traditional Mass are missing out on possible vocations. I heard of one ordinand recently who had his ordination delayed because of his interest in the Traditional Rites. In many parishes in the not too distant future Bishops will be faced with the problem of finding any priest to say any Mass.

The interesting thing is that seminaries which are the most antagonistic to "Tradition" seem to produce priests who within a few years of ordination are celebrating the Traditional Mass. The situation is made a bit difficult for them in that few seminaries actually teach Latin, despite what comes from Rome. Someone recently suggested that diocese were the bishop is less likely even to attend a Traditional Mass is likely to have more celebrating it. This could just be a bit of clerical contra agere, but without evidence one can't merely dismiss it as such.

For young men serving the Traditional Mass there is a cost; it involves study and practice, it also involves taking on a particular spirituality and making sense of the theology of the Mass, it involves an enculturation and a sense of thinking with the Church, and ultimately, I hope, discipleship. It certainly provides the framework for discipleship; silence that leads either to boredom or to prayer. In similar way the uncompromising nature of the rubrics demands obedience, which either leads to a stunting rubricism or to liberating abandonment of one's own will to the will of God.


As a footnote: Fr de Malleray of the FSSP is offering a vocations discernment weekend in July.
at June 26, 2012

I am sure that you have had a positive influence in causing these men to test their vocations.

But this also supports what we all know, namely, that altar service by males, is a substantial pathway to the priesthood.

And don't worry, no one, even altar servers, are indispensible!
God will provide.

Goodness Father - you do make serving at mass sound difficult - however did my generation manage it? But perhaps our serving was far from perfect but I just remember it as a privilege which is now denied to most of us.

Serving the TLM would be facilitated if the training of boys (assuming a number of willing lads) began early, Father. Back in the day it began for us in Primary School. We weren’t taught Latin yet, but the lay headmaster would painstakingly teach us the responses syllable by syllable and we learned them by heart: Ad De-um qui lae-tif-i-cat (we were amused at the ‘cat’ part…).

Servers were grouped into ‘batches’ each with a ‘Prefect’ who maintained the schedule, trained the younger boys and assigned tasks for Mass. There were 8 boys of different ages and experience in a batch. You learned the tasks from the senior boys and by doing them. Over time you progressed to being accomplished at all of the tasks – including High Masses, though these were rare.

I don’t know if you have a Catholic Primary School nearby Father, but if so, that would be a place to start. Once a program is established and seen as attractive, it can take off from there, as younger boys follow the example of older brothers or friends. Of course the smaller families of today make this more difficult than in times past.

I am saddened to learn from Z cat that Traditionalist seminaries will not consider him because his parents are divorced. Surely we are not responsible for our parents' problems? This seems most unfair.

I seem to remember reading some time ago that boys who were illegitimate were also not allowed to become Priests. I hope that that is no longer the case as again they are not responsible for the fact of their parents not being married.

Would an orphan who had no idea who his parents were be also denied the Priesthood? Just wondering.

"Mediocre"? Oh I think not, Father!

Z Cat
I should not have published your comment, I have removed your initial comment and Father's response.
I think to continue a conversation in a public forum, which is obviously about a private matter and then want to escalate it, would give me very serious misgivings about a vocation which must by its nature be about discretion, restraint and self control.

My apologies Father for not spotting the very personal nature of this comment and for causing you embarassment.