Where Peter is there is the Church and there is God. 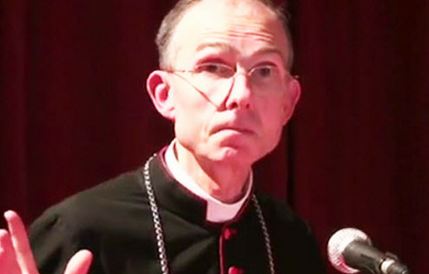 I pray for the full re-integration of the SSPX. I was pleased that Bishop Fellay had a two and a half hour meeting with Cardinal Levada yesterday and seems to have been sent off to reconsider what the SSPX phrase "the errors of the Council". I really do think that the Church needs the SSPX but I believe the SSPX needs the Church more.
I have a simple Englishman's faith, that goes along with King Oswiu at the Synod of Whitby, who asked the Celtic bishops, "When I die, who will open to me the gates of heaven, will it be Columba or will it be Peter? The Celtic bishops of course had to answer that it would be Peter, and became Catholic. The same question has to be put to the SSPX bishops, union with Peter is not about anything less than salvation itself.
Yes, of course God can choose to save us outside of visible Communion with the Pope but as Catholics we know that full and visible Communion is God's plan and desire.
Rorate carries an interview with Bishop Bernard Tissier de Mallerais which I find shocking in its arrogance and presumption and in its recklessness towards the salvation of souls. I have no doubt that Archbishop Lefebvre chose the four bishops he consecrated, not to lead the SSPX but to dispense that sacraments. In this interview one can see why, and why the Holy See intends to deal with the bishops individually.
As much as one desires the communion of all humanity to the Church one has to accept that for some this will never be.

The union of Christians cannot be fostered otherwise than by promoting the return of the dissidents to the one true Church of Christ, which in the past they so unfortunately abandoned; return, we say to the one true Church of Christ which is plainly visible to all and which by the will of her Founder forever remains what He Himself destined her to be for the common salvation of men. ...No one is in the Church of Christ, and no one remains in it, unless he acknowledges and accepts with obedience the authority and power of Peter and his legitimate successors... Therefore, to this apostolic See, founded in the City which Peter and Paul, the Princes of the apostles, consecrated with their blood, to this See which is the `root and matrix of the Catholic Church', may our dissidentsons return; let them do so, not with the thought and hope that `the Church of the living God, the pillar and ground of the truth', willsacrifice the integrity of the faith, but, on the contrary, with the intention ofsubmitting to her authority and government..."      Pope Pius XI: 1927 Encyclical Letter Mortalium animos

Ultimately the issue isn't about the teaching of Vatican II, it is about communion with Peter: ubi Petrus, ibi Ecclesia, ibi Deus, (where Peter is there is the Church and there is God). For some members of the SSPX there is mystical Church, a spiritual Rome that only the pure and elect can see, that is not what God has given us but a messy,  fish smelling, sweaty crewed barque of Peter.
at June 14, 2012

Yes, I found the bishop's responses extremely arrogant, self-righteous and lacking even in basic charity. It must be burdensome to be so assured of one’s own thinking. It has a ring of “I know more than God…” Of course this is not new. There have been precedents.

Of course the council can err.

To the horror of ultramontanists, it was significantly (i.e., except where it repeated truths of the extraordinary or infallible ordinary magisterium) an act of the error-prone mere authentic magisterium.

People are stretching infallibility beyond all reasonable bounds.

Also, at you tube, there are sermons on SSPX v. Rome. There are five of them.

In the you tube search bar, type in 469fitter (no spaces) therein are contained the sermons of Priests that stand on the side of Truth.

In the interests of fairness and justice, they should be viewed.

Pray for the Holy Father and all his Priests and religious.

I am traveling with one of the Priests at the moment to the consecrations at Winona, Minnesota.

Father, I didn't read all the letters written in response to the Rorate/de Mallerais interview, but one of them - 'Peterman - asked "what are Catholics to do when their bishops (as in his case) allow only one EF Mass per week?"
What indeed? What about a church in which in which, in the mother church of Catholicism in the British Isles, there is only one EF Mass per MONTH, (not advertised anywhere but in traditionalist media) yet in the same diocese, there are twice as many 'gay Masses'; a church in which there are 'happenings', such as Assisi; in which there are formal signings of agreement between the church and LUTHERANS, for goodness sake, which a lot of the faithful will understand as meaning that the church says that Luther was right; and where many are now convinced that it's now all right to join the Masons; in which there are 'non-happenings', such as the Fatima consecration.
Hermeneutic of continuity; Hmm, odd idea of continuity.
All of which is hardly likely to encourage de Mallerais to enter full communion with Rome. He seems more like a man who is very aware of the nature and dastardly cunning of the opposition and who wants to see every 'i' dotted and every 't' crossed before taking his sheep into wolf territory

Sermon of Bishop Tessier at the Winona Consecrations.

or go to you tube, in the search bar type in 469fitter (no spaces)

The video is contained therein.

Until Archbishop Lefebvre finally decided to consecrate bishops for the Society of St Pius X in June of 1988, he was, like all Catholics since Vatican II, torn between the Catholic Truth and Catholic Authority that that Council, following the modern world, had split from one another. However, once he had taken that decision, which proved clearly to have been the saving of Catholic Tradition, it was as though everything in his mind dropped back into place, and he never again wavered until his death some two and a half years later.


As an example of his clear mind, here is a letter that he wrote on August 18, 1988, to Dom Thomas Aquinas, the young Prior of the monastery in Brazil which had been founded from the Traditional Benedictine monastery in the south of France, le Barroux, under Dom Gérard. Alas, within days of the consecrations in Écône, Dom Gérard had broken with the SSPX in order to integrate his monastery into the Conciliar Church. Here is what the Archbishop wrote to Dom Thomas:–


“How I regret that you had to leave before the events of le Barroux (i.e. Dom Gérard’s defection). It would have been easier to consider the situation resulting from Dom Gérard’s disastrous decision.


“In his declaration he lays out what has been granted to him, and he accepts to put himself under obedience to modernist Rome which remains fundamentally anti-Traditional. That is what made me keep my distance. At the same time he wished to retain the friendship and support of Traditionalists, which is inconceivable. He accuses us of resisting for the sake of resisting. I did warn him, but his decision had already long been taken, and he did not want to heed our advice.


“The consequences are now inevitable. But we will have no further relations with le Barroux, and we are advising our faithful to give no more support to an operation which is henceforth in the hands of our enemies, the enemies of Our Lord Jesus Christ and of his Universal Kingship. The Benedictine Sisters (attached to le Barroux) are in great distress. They came to see me. I gave to them the advice that I give to you: remain free, and reject any tie with this modernist Rome.


“Dom Gérard is using every argument to paralyze the resistance. (â¦) Fr. Tam will tell you what I have not written down here. (â¦) May God bless you and your monastery. Mons Marcel Lefebvre.”


Subsequently Dom Gérard visited the monastery in Brazil to make it follow him into the Newchurch, but young Dom Thomas bravely stood his ground, and the monastery under his guidance has remained Traditional ever since. What does not appear in the letter above is that the Archbishop actually encouraged Dom Thomas to rally the faithful monks in le Barroux, and eject Dom Gérard!


Such was the Archbishop’s clear mind and will from the Episcopal consecrations onwards. One wonders how some of his sons can now be wanting to put themselves “under obedience to modernist Rome which remains fundamentally anti-Traditional”, or, under a subjectivist Pope who has no possible understanding of objective Catholic Tradition. Such is the power of seduction, increasing all the time, of the subjectivist world around us. The madness of subjectivism has become so normal, so widespread, that few people notice it any longer. “Our help is in the name of the Lord.”

This is a time of great turmoil in Holy Mother Church.

While we all must stand on Truth, we should pray fervently for all Priests, good or bad.

We must pray with our hearts begging Heaven on behalf of the Holy Father, all his Priests, all his Sisters and Nuns, all his Religious.

We must have Charity for all the poor souls.

Let our battle cry be:

Sorry about the long wind, Padre.

Thank you for your patience with me and many others similarly situated.