Dyptichs of the Living and the Dead 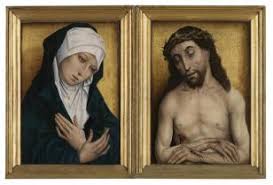 Most people don't know how to pray the Mass, and it is possibly more difficult when Mass is in the vernacular. The problem is they don't know whether they should listen to what the priest is saying, or pray along with him, or allow his prayers to trigger their own, or what. It is made more difficult when the priest faces people, even if he is addressing God he appears to be really speaking to them.
Rightly some have suggested the Mass or at least the Eucharist Prayer is in crisis, as the Pope did in "Spirit of the Liturgy". One of the reasons for boredom at Mass, and then lapsation, is simply that people don't know what to do at Mass. If anything, the liturgical reforms have deadened the people's understanding of their priestly, intercessory, role at Mass.

The ancient custom of placing the dyptichs of the living and the dead on the altar during Mass might give us clue about what we should be doing during Mass. The idea is reflected in the Roman Canon where the living; the Pope, the Bishop the faithful are prayed for before the consecration, after the consecration, which acts as hinge, the faithful departed are prayed for. Coming from a world where apparently no-one before St Ambrose could read without vocalising or at least moving their lips, I suspect the same thing happened in the Mass, people muttered their prayers aloud. When the priest prayed sotto voce, so did the people.

So, an idea for November, why not prepare an extensive list list of the dead (and the living too) to intercede for during the Eucharist Prayer: include realatives, friends, enemies too, ancestors, benefactors, notorious criminals, people in the news, war dead, forgotten dead and then interced for them when the priest prays for the dead formally after the the consecration. Before it interced for the living, there should be lots to pray for, our hearts are supposed be huge with charity at Mass.
A friend of mine who died at 104 30 years ago used to use her address book and the newspaper as her prayer book, by the end of her life the former was full of the dead and the paper was her main contact with the living.
at November 02, 2012

I try to do this, in a zippy way, because there's little time, and the prayers become general and names of individuals become 'groups'. I hope not including individual names carries some merit.