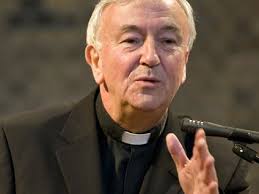 Archbishop Nichols criticised George Osbourne last night in speech and spoke of the deep unease he felt existed over the redefinition of marriage. He pressed for the full disclosure of the Governments "consultation"
.

But speaking in London, after a four-day meeting of Catholic bishops, the Archbishop said: “He is the politician not I – I just think it is too important to be made simply as a political football.
“This is not simply a redefining of marriage to accommodate a few, it is a redefining of marriage for everyone and therefore all marriages, if this bill is introduced, will be different.
“It is a different reality for everybody and that is a very serious matter and one to which we are very strongly opposed and will remain strongly opposed. He said that while it was for politicians to try to judge the political mood the Church would continue to argue for the traditional definition of marriage as a union between a man and a woman.
“It is a very important building block in society and it is very foolish to alter that when as far as we can see there is not a specific identified problem that that change is supposed to be addressing,” he said. “My own sense is that many people feel deeply uneasy about this move, it was not in any election manifesto, it has not in that sense been put to the country.
“That is why the strength of opinion expressed in the consultation ought not to be hidden and that’s why we want the full disclosure of the results of that consultation.”
At its gathering in Leeds this week, the Catholic Bishops’ Conference agreed a resolution insisting that all political parties allow their MPs a free vote on the issue and the results of the Government’s consultation on “equal marriage” be published in full. The consultation document made clear earlier this year that the different views expressed would be taken into account but “not the number of responses received”.

Perhaps pressing for the disclosure of the consultation document is something that even the most militant pro gay marriage MP is something might agree to, if that happens then perhaps those who are just afraid of being called "bigot" or "homophobe" might take courage.

Any weasel worded survey will be as crooked as only a politician can make it.I have not yet met anybody in favour of SSM.

If a referendum on this World-Changing question was as well organised as Police Commissioner fiasco then we are all doomed.

There is light at the end of the tunnel though;it could be the end of the line for this incompetent self aggrandising coalition.They should be recommended for inclusion in the Guinness Book of Records for the about-turns they have performed.

Apparently Victorians were quite influential in redefining marriage - devolution from 'sacrament' to 'contract'. To be fair the radically un-Christly habits of how too many husbands acted towards wives was in no small measure part of the cry-for-contract...

marriage as a contract - this is how california is dealing with the problem of gender-neutral-paternity:

Father do not place too much hope of any change of heart following the publication of a full disclosure in the consultation process.

Here in Scotland we gained access to the results of our consultation process through a freedom of information request. It showed that over 88,000 responded with almost 70% of people against. The highest ever response to any public consultation.

The government then gaily announced that it would still proceed with the bill. Politicians and the democratic system working at its best!

I wrote to my MP asking, among other questions, what, if any, is to be the new definition of 'consummation'. She normally responds to questions/complaints in a week or two but, on this matter, nothing after months. I understand that the BBC will not permit this question to be raised so the supporters obviously see this as a 'weak spot'. I would encourage everyone to put this question to their MP's.

You wrote that 70% of respondents to the Scottish Government's consultation were against the proposal for same-sex marriage; true, but this should be seen in context.

Unlike the 'broad opinions' plan of Westminster, the Scottish Government published not only opinions and actual statements from respondents, but also data.

Of the some 68,000 responses, about 20% came from outside of Scotland and these were, to my understanding, not considered. I believe this to be proper, for it was a consultation for the people of Scotland not those residing in England or the USA. The responses (for and against) which were submitted via petition were also discounted. Petitions are easily manipulated and require little thought compared to a consultation questionnaire, so I can understand the reasoning for this as well. Of the remnant some 67% turned out to be in favour of the legalisation of same-sex marriage.

1. Out of the some 100,000 petition cards distributed to Catholic parishes, only about 6% actually found
their way to the Government. Why such a dismal rate of return?
2. Due to the radical nature of the proposal, the Scottish Government's consultation was well known and easily accessed via the internet. The process lasted several months and could be done online (as did I) or post (as did my parents).
3. It took me 15-20 minutes to complete and was straightforward. Not a lot of time to spend on such an important matter. It is sad that many felt disinclined to participate in the proscribed manner.

Father
It may be interesting to compare reports of the demonstrations in France. BFM TV reported that more than 100,000 people demonstrated against the government's plan. This was one of the main items on the news which I watched.
http://www.bfmtv.com/societe/plus-100-000-personnes-rue-contre-mariage-gay-385258.html

By contrast the BBC TV news did not report it at all. The website reports: "Tens of thousands of people have protested in France against plans to legalise same-sex marriage and allow gay couples to adopt.

"Police said at least 70,000 took to the streets in Paris; there were other demonstrations in the cities of Lyon, Toulouse and Marseille. "

Do the BBC wish to conceal the numbers involved?
I liked the banner: Je suis un enfant, pas un droit.
Cardinal Barbarin participated. Good on him.

The BBC did report that there were counter-rallies but ignored the fact that they tried to block the way of the authorized demonstration and were only moved, in Toulouse by police use of tear gas. Nor did the BBC think it worth mentioning that Muslims and others joined the anti-Gay marriage demonstration.

It's a good start but needs to be repeated, not only by VN, but by all the bishops by all means. The message needn't be inflammatory but based on calm reason and Catholic Church teaching and stated loud and clear.
It has been a serious misjudgement to keep silent, thereby supposing the Catholic Church will not be hated.
Appeasement never works. The result has been confusion among Catholics themselves.

Re 100,000 demonstrating in Paris, capital of once Catholic France, Peter notes: "the BBC TV news did not report it at all."

Funny how they managed to report, with pictures, a couple of hundred demonstrating in Dublin, capital of still Catholic Ireland, for abortion legislation following upon a carefully crafted controversy about which they have so far refused to publish the truth. The truth being that had the medical personnel aborted the foetus the patient would have in all likelihood died much sooner and in greater distress.

Indeed Hughie.
Nor did the Radio 4 Sunday programme mention the matter.
The French bishops do seem to be raising their voices and setting an example.
Meanwhile I liked the demonstrator who pointed out that a mayor who performs the civil marriage ceremony delivers a Livret de famille which has space for the children. Also the need to change the civil code to replace the terms mother and father with parents 1 and 2 was pointed out.
Now the cat in the hat had thing one and thing two so perhaps this is a clue for us....

We had a run at this issue in our Parliament here in Australia. Towrds the end of the previous Government a Bill was passed which defined marriage as the union of a men and a woman to the exclusion of all else. Then the Government changes and we had a second go at the matter because a couple of our States wanted to pass legislation in favour of SSM. There was a free vote in the House on the Government side but the Opposition ordered a three line whip in favour of the current legislation passed by the previous Government. The result was an overwhelming victory prohibiting same-sex marriage. But the issue has not gone away I assure you.

The Mennini effect? It seems to work pretty promptly!

JARay, I was reading the history of the Lambeth Conference of 1930 which permitted contraception for married couples in very specific circumstances. The point which jumped out at me was that the conferences in the years preceding 1930 gradually wore down the opposition to contraception. We can't afford, in Australia, to rest on our laurels re the SSM bill - the advocates of it certainly won't.