Her Majesty's Ministry for Religion 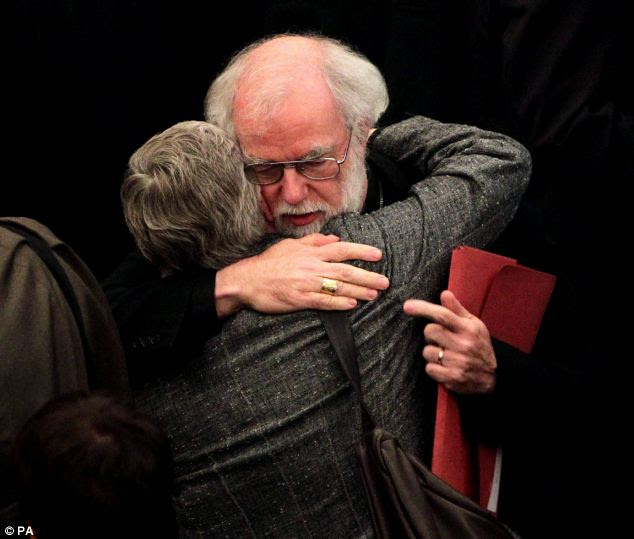 ''I am a little surprised by the reaction of the Archbishop of Canterbury to the Synod vote yesterday, he is really very angry, any facade of niceness seems to dissappear. His anger seems to be that the dear old CofE seems out of touch. Dave Cameron says he is 'very sad' and a 'sharp prod' is need to keep national institutions are relevant in modern Britain. Another MP called for law to be changed to force church to accept women. The Bishop of Chelmsford said 'Church in danger of being national embarrassment'. A clergywoman: 'We have made ourselves an irrelevance'. And other female clergy are considering leaving 'the ministry'.

It all seems really as if the CofE is nothing other than a branch of government which has failed in promoting its liberal agenda. Rowan Williams warned the church looks out of touch and has 'a lot of explaining to do', some other official had said something like "What does this say to young people?" My answer is, it says  nothing, apart from a very small minority, even of its members is really interested in what the Cof E has to say, because in fact, it and maybe all Christian groups, including our own, have become totally irrelevant in forming opinion in the UK Primarily because we all seem to be parroting the same old liberal message of: be nice, rather than speaking with the authority of the Gospel.

The vote yesterday according to the arcane system of the CofE was democratic, and yet that seems to be unacceptable. Those who know about these things say that it was the voice of the under represented bible believing Evangelical laity. The very people who Eton educated but Holy Trinity Brompton - Alpha Course formed Justin Welby was brought in to control. If the idea of female bishops is going to be re-introduced in 5 years time, after all these ladies have left ministry and some of the old liberals have died off and the growing, only growing bit, the Evangelicals, have grown a bit more, the CofE will be a little different.

It is the anger and the frustration that carefully laid plans have just not come off, that really the plebs just haven't done what they should have done, is what seems to be the dominant the reaction today. There is some talk of disestablismentarianism because the CofE doesn't reflect the prevailing social mores. It is that very English thing of making God a subject of the King or latterly parliament, or now more importantly the media, it spattered the brains of St Thomas over the floor of his cathedral. It is the whole problem with being "established" and "establishment" really being Her Majesty's Ministry for Religion.

There was a rather worrying interview with Frank Field on the radio a few minutes saying he intended to introduce a bill to exempt "the Church" from the exemption to the equalities legislation, he said it wouldn't apply to the Catholic Church, "yet", very worrying.

The seem to have a problem with democracy. How will they ever understand the Catholic mindset?

Their church is almost a joke.

Anything Frank Field says can be taken with a pinch of salt.

He's been playing both ends against the middle for years and for some inexplicable reason has always managed to get exactly where he wants to be.

At sea we had a good phrase to explain people like that but that could not be put on screen.

Does the Church of England believe that the Holy Spirit guides the deliberations of their Synod?

But why do Evangelicals oppose the appointment of women Bishops? They seem to be quite happy with women priests.

This vote is bad for Catholics and the 'catholic' remnant of the C of E is already being blamed even though it is the evangelicals who are the main drivers in all of this.

Let them have their female bishops if it keeps them happy.

Looks like we will be training priests abroad again to be sent into the English mission due to equality laws. The C of E was always a parlimentary religion. You can see it - there can be no unequal and unfair treatment in a profession which is contrary to the law of england where the Bishop of Rome hath no jurisdiction.

Bishop of Rome says says and does - ordains priests and bishops who are male outside of the Uk.

As to equality and gay marriage and forcing the catholic church to do that which it cannot - Bishop of Rome alters Ne Temere and states it does not apply in the Uk due to the persecution of the faith (he does not even have to say the latter re persecution) thus Catholics can have valid marriages with two witnesses without a priest and the state can do nothing to invalidate them. Imagiee how much catholics would save on weddings - get a few friends around, lay a spread on, a few sarnies, perhaps a decade of the rosary, the couple declare their marriage. And a bit of booze. Then your friends trot off home. The business is done consumation wise, a sleep in the next day or for a few days depending on how amorous the couple are feeling.

Do the politicians not realise that Catholics have a long memory of recusant persecution nor do they not know that the Church can be very creative. The whole point of Canon Law is that it is creative in its protection of the deposit of faith.

Do you think Jack Straw has read the Codex Iuris Canonici?

Anyway, I am just off to have a chat with Sergei the Meerkat, he has tied his cravat to hard and is having trouble having it undone. He his working his way through the Codex Iuris Canonici 1917 in Latin and is having a bit of trouble, he is a bit concerned that Meerkats are not subject to Latin Canon Law. I will reassure him that since he is from Russian parts the he is probably oriental and that he has his own Canon Law. All Meerkats are equal in the law of the Church.

HC,
I don't think this was a vote against women bishops but rather a vote against the law would introduce them, insofar as there was no provision made for those who in conscience could not accept them.

I don't know what the CofE thinks about the HS, most probably it speaks through the Queen in Parliament, which today means the ballot box.

There are several new elephant traps in view, Lady Bishops,SSM,Votes for cons and EU Budget. Looks like a Win Win for most of us poor mesmerised souls.

We can only watch like a rabbit watches a snake

The Queen and her 'church' are like a man with a sex change talking about having children.

A great success for the Devil is to get Catholics to consider the churches he has established to be equal to the Bride of Christ.

Father you wrote: "It all seems really as if the CofE is nothing other than a branch of government which has failed in promoting its liberal agenda."

But that is precisely what the CofE is - a branch of Government totally subservient to Parliament.

Funnily enough I was reading Hilaire Belloc's "Europe and the Faith" on the train and what he says about St Thomas a Becket defending a rather weak position but in doing so making the very important point that it is not for the State to dictate to the Church.

That the CofE is a branch of the state is without question. It's in its genes. All pretence that the two are separate has been fast eroded over the last few decades with the CofE hierarchy preferring the humanist rather than the Christ-like take on social issues. The position it takes cannot be a surprise to anyone. However, any church which forgets that its job is to save souls is doomed to implode.

I wonder if the Coptic and other Orthodox Churches will be in the same boat as the Catholic Church in England. That also will not sit well with the Patriarchs of Alexandria, Antioch, Jerusalem, Constantinople, and Moscow. Will their clergy also be jailed and imprisoned for not allowing un-natural weddings in their Churches. The British government doesn't only have the CoE and Roman Catholic Church to deal with this time. But they also have the Eastern Churches as well. And Eastern Christians that are constantly persecuted for their faith, even today, will not take secular mandates on their faith likely.