A Preference for Roman Vestments 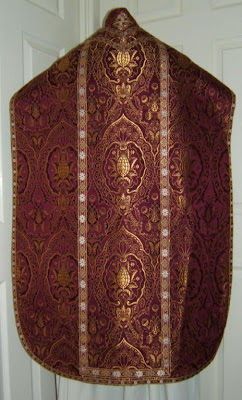 "You are fat", a small child said to me recently, she wasn't quite telling the truth, and it was quite unprovoked, I was a little insulted. I wanted to respond, "You are ugly", but I thought she would be scarred for life and sue me in ten or twenty years for psychological damage. So I merely told her she was the nicest child I had met in the last ten minutes but I suspect any irony was lost on her.

Most of our Masses here are celebrated ad orientem, I leave the choice up to the sacristan. Those who have read the General Instruction of the Roman Missal are keen on it, those who have also read Sacrosantum Concillium strongly prefer it and those who have read Joseph Ratzinger's Spirit of the Liturgy tend to insist on it. Apart from the occasional visitor who has only ever read that liberal fanzine sold at the back of Westminster Cathedral (for the time being) no-one tends to object. It could be most Catholic laity are just relieved I don't wear a clown mask or come in on a scooter.

In fact most of our visitors, and we have lots, are happily surprised. One American visitor who had previous been to Mass at Brompton Oratory and one parish in South London, asked if anyone in England ever faced the people "like we do in the States", I told him that a lot of older priests and practically all Jesuits did.

What I have noticed is that it is our celebration is more prayerful. I have been talking a lot about our common priesthood recently: that an important part of our presence at Mass is that we are present to intercede for the living and the dead and for ourselves too of course. There is something very definite about a priest standing the same side of the altar as the people which says with Augustine, "with you I am a Christian, for you I am a priest". I cannot help feeling the priest standing barricaded behind the altar makes him look and feel like a man behind a desk, a teacher, a bank manager or someone at the social benefits office. It emphasises clericalism and that infantalises the people and the altar, which should be the great sign of Christ, becomes something which rather than uniting the baptised divides them. The rubric about the altar being separated from the wall (and presumably any other architectural feature) was not so that Mass might be celebrated facing the people but to emphasise its sacred and symbolic character, the focus of our worship.

There is something strange and unnatural about just seeing someone's torso above the altar, which I suppose might be the reason for altars that consist of a mensa on legs, or even as I have seen in Italy a glass or perspex altar.

Though I tend to leave the choice of vestments to our sacristans, I have noticed to that since saying Mass on the same side of the altar as the people I have a preference for vestment that are less rather than more. I commissioned a couple of rather ample JPII chasubles from Watts and Co a few years ago, they are rather beautiful but they make me feel "big", which on reflection might have been what the little girl really meant, that just feels wrong, nowadays. I much prefer vestments which tend to make me smaller: Roman rather than Gothic. Standing with the people tends to remind the priest that he must diminish and Christ must increase. That seems to be at the very heart of Pope Benedict's teaching about priesthood. Liturgical gestures too I feel should become smaller less, about dominating the assembly and drawing attention to myself, and more about gestures that aid prayer and are physical acts of prayer, more for God than as dramatic acts for the people.

It's a real shame that children pick up a sense being fat is wrong, so hopefully your response would have made her feel it is perfectly nice to notice that some of are bigger than others. I'm fat and I work hard to help my kids understand that fat and thin are just different body sizes like blonde and brunette are different hair colours and not some moral failure or success.

"There is something strange and unnatural about just seeing someone's torso above the altar, which I suppose might be the reason for altars that consist of a mensa on legs, or even as I have seen in Italy a glass or perspex altar."

I once read an article by a playwright, who stated that if you want the audience to have empathy with a character, they have to be able to see his feet. I'm not sure why this is true, but it seems a pretty reliable rule of thumb.

My own preference in the way of a chasuble (not that I wear one) has always been for the Gothic rather than the Roman. The Roman has always reminded me of someone standing in the street wearing sandwich boards with some kind of cryptic message on such as "Prepare to meet thy doom" or perhaps "Eagle Boys Pizzas, $5 take away"

Have you noticed, Father, how the right hand side of the chasuble folds in on itself? Having just taken some (rather old) vestments for cleaning & slight refurbishment the cleaner suggested I have some tailors' canvas sewn in the prevent that happening.
Whilst agreeing wholeheartedly with your preference this is a niggle.

I certainly think it is easier to pray with one's back to the people, as I do at all weekday Masses simply because the altar is fixed to the wall. To say Mass facing the people requires the priest to concentrate more on the God to whom he is directing his prayer. I think therefore that priests who prefer to say Mass with their back to the people are probably opting for it because it is easier, and I am not sure that is a good reason.

Nothing wrong in making it easier to pray to God. Why have to force yourself to concentrate in order to ignore latecomers, and a possible shifting, restless congregation?
It seems to me you'd have to spend more time concentrating on concentrating than on prayer itself.

I much prefer the fuller Borromean-style Roman chasuble to the smaller almost apron-like ones of the late 19th, early 20th Century.


What I object to is what a writer once called "clusters of belief". A common one is that us.ant = Roman style vestments. I don't mind them provided they are not exiguous and minimilist. My views are purely stylistic and from the pew as I never worn a chasuble.

Shortly after his coronation, Bl. John XXIII heard a woman remark "isn't he fat!" He replied "Signora, a conclave is not a beauty contest".

God Bless the unpc child else we wouldn't have this post!

"with you I am a Christian, for you I am a priest" - with the Priest facing the peeps the Mass feels more like a conversation between the peeps and the Priest. i find myself staring at the ceiling decorations to remind myself that somewhere there are seraphim and cherubim singing with us and angels taking up our prayers even if there's no incense to carry them on.

p.s. my nephew once said to me when I'd poured myself a nightcap, 'oh, vodka, really? This time of night' I stood there suddenly feeling like a lush. I took the tipple anyway, but we've all been there Father.

Deacon Tony. I think you'll find that the orthodox amongst us have learnt the importance of tolerance and are happy to accommodate and learn from those with a different liturgical tradition to themselves, as opposed to taking to the new media to openly snipe, carp and gossip about brother clergy and fellow Catholics at every opportunity.

Your repeated snides on here and other forms of social media and open animosity towards various Catholics who you perceive to be of a right-wing political persuasion or traditionalist bent are as disappointing as they are misguided. I am sure that as someone who regularly uses his holy orders to justify his jibes at others you would be horrified to learn that you are fast becoming a source of much concern and scandal.