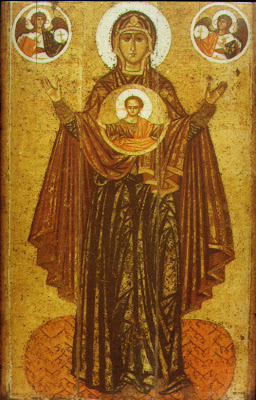 Of the Divine Word
Pregnant with the Word Divine
The Virgin pregnant comes
Walking down the road
If you grant her an abode.

In this Advent of the Year of Faith it is worth trying to understand more deeply the role of the Blessed Virgin in the life of Our Lord and of his Church. VII saw her as an integral part of Salvation and the Church.

It might be helpful to think of Advent as the "pregnancy of the Church".


From Lumen Gentium 55. The Sacred Scriptures of both the Old and the New Testament, as well as ancient Tradition show the role of the Mother of the Saviour in the economy of salvation in an ever clearer light and draw attention to it. The books of the Old Testament describe the history of salvation, by which the coming of Christ into the world was slowly prepared. These earliest documents, as they are read in the Church and are understood in the light of a further and full revelation, bring the figure of the woman, Mother of the Redeemer, into a gradually clearer light. When it is looked at in this way, she is already prophetically foreshadowed in the promise of victory over the serpent which was given to our first parents after their fall into sin.


Likewise she is the Virgin who shall conceive and bear a son, whose name will be called Emmanuel. She stands out among the poor and humble of the Lord, who confidently hope for and receive salvation from Him. With her the exalted Daughter of Sion, and after a long expectation of the promise, the times are fulfilled and the new Economy established, when the Son of God took a human nature from her, that He might in the mysteries of His flesh free man from sin.


56. The Father of mercies willed that the incarnation should be preceded by the acceptance of her who was predestined to be the mother of His Son, so that just as a woman contributed to death, so also a woman should contribute to life. That is true in outstanding fashion of the mother of Jesus, who gave to the world Him who is Life itself and who renews all things, and who was enriched by God with the gifts which befit such a role. It is no wonder therefore that the usage prevailed among the Fathers whereby they called the mother of God entirely holy and free from all stain of sin, as though fashioned by the Holy Spirit and formed as a new creature.


Adorned from the first instant of her conception with the radiance of an entirely unique holiness, the Virgin of Nazareth is greeted, on God's command, by an angel messenger as "full of grace",and to the heavenly messenger she replies: "Behold the handmaid of the Lord, be it done unto me according to thy word". Thus Mary, a daughter of Adam, consenting to the divine Word, became the mother of Jesus, the one and only Mediator. Embracing God's salvific will with a full heart and impeded by no sin, she devoted herself totally as a handmaid of the Lord to the person and work of her Son, under Him and with Him, by the grace of almighty God, serving the mystery of redemption.


Rightly therefore the holy Fathers see her as used by God not merely in a passive way, but as freely cooperating in the work of human salvation through faith and obedience. For, as St. Irenaeus says, she "being obedient, became the cause of salvation for herself and for the whole human race." Hence not a few of the early Fathers gladly assert in their preaching, "The knot of Eve's disobedience was untied by Mary's obedience; what the virgin Eve bound through her unbelief, the Virgin Mary loosened by her faith." Comparing Mary with Eve, they call her "the Mother of the living," and still more often they say: "death through Eve, life through Mary."

An interesting book, 'Queen Mother: A Biblical Theology of Mary's Queenship', by E. Sri, shows the importance of the Queen Mother in ancient Israel/Old Testament - leading to how much more important Queen Mother of God Incarnate of the New Covenant.

I used to wonder about the interaction at the wedding feast of Cana - the whole 'woman', bit - I recently heard a beautiful exegesis purportedly based on more authentic meaning/translation - to paraphrase - 'Woman what begins/happens for Me begins /happens for Thee' - meaning, if you choose this moment for the beginning of My ministry, from this moment you take up the role of the Woman of Sorrows; works for me on a lot of levels.

"Entrance into the Divine Life parallels the birthday of our Saviour's life in the world and the moment the newborn Baby Jesus is laid in the arms of His Mother."
Fr Heilman - 'Church Militant Field Manual'.

Each Sunday four
In front of Yule
When she arrived
Upon a mule.

A revolution
Round the stall
Till suddenly
On knees were all.

Like priest incensing
Hallowed altar
To bear her Son
All kneel none falter.

There is a video of St John's poem sung in Spanish: http://www.youtube.com/watch?v=XsN0rdot8_0