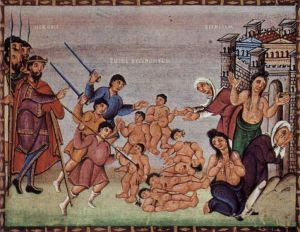 Brighton is a bit light on Christianity according to the census figures and likes its Christmas stories "lite"and heavily spinkled with glitter. I had a telephone call from a local journalist from The Argos, the local paper, a little while ago asking for a reaction to a local production by a group called Soul by the Sea, it is happening in a huge Anglican Church, St Mary's in Kemp Town, Brighton's Gay village.

I have not seen it or heard much about the production but the journalist said there had been "a strong local reaction against it". Apparently Herod's soldiers stamp on babies and there is a debate on whether the Blessed Virgin Mary should have an abortion, both things the journalist seemed to think shocking, he told me he wasn't "that familiar with story" himself. I got the impression he thought I should be outraged. I am not I am glad these issues are being presented in a Nativity play.

I am always bit anxious about evangelical Protestants portraying the Theotokos, prejudice against the orthodox Catholic Tradition tends to blind them against what scripture is actually saying and they also tend to have a shallow theology of the Incarnation, however, as Itold the journalist, I am glad that this group are stripping away the saccharine fairy tale aspects of the story. I pointed out the story of God becoming man was an adult story and not to be regarded as on a par with Father Christmas and the camper, tinselly portrayal of Christmas.
at December 12, 2012

Interesting that the Argos phoned you. I agree that the Nativity story, with Mary and the Babe shivering in the cold and Joseph in existential pain at not being able to find a place, while the entire people of God in Bethlehem ignored a young couple, and where a psycho king just had to kill ALL the baby boys to stop a prophecy, as if he could...are not nice stories.

Those Bedouin shepherds who were visited by the angels did not smell very nice, either. Have you ever been in a large flock of sheep?

God's chosen ones and His timing are not ours.

The crappy Argus will of course be delighted about the Census purportedly giving a huge Heathen-Count for Brighton.

I would suggest that the impertinent questions in the Census drove most people to put erroneous answers down and the whole thing is virtually useless. we may well find that it is the last Census we see in this country

It's extraordinary that despite the fact that we live in a post-everything-that-should-matter-world, the very word 'nativity' still conjures images and at, least, some warm sentiment of/to Our Infant Lord.

the 'we' is on the decline, however:

Barry, I do not publish blasphemous heresy here but I think your comment demonstrate how far the CofE have abandoned the Catholic Creeds, and the Catholic Tradition of the Fathers of East and West.

Don't know if I'm getting over-sensitive but listening to the BBC I get the idea that nobody has a wife or husband,they all talk about "my partner".

Has that Maria Miller bird got the power to slap a D.Notice on words? ; and I think that same sex couples will be known as husband & husband or wife & wife.

The Rev Charles Dodgson must have had a trip into the future before he wrote Alice in Wonderland.

But did they print any comment from you Father? My guessw would be 'no' as hacks are really only after outrage - there is no story in somebody agreeing or saying 'so what'.

great post. Thank you. It needs to be said that nowadays Mary would have been urged by clinicians among others to have an abortion and in some countries would have been forced to do so. we need nativity plays where her and Joseph's staunch courage for the Lord is portrayed, and where we feel their suffering as refugees. I once saw a mystery play in which women screamed as their babies were snatched from them during the slaughter of the innocents. I went to it with my then little children, and it didn't scare them. and now they are standing up for unborn babies (not just because of the mystery play, but it contributed, maybe) as well as enjoying a good pint of real ale etc. God protect our children always in the battle between good and evil. Victory belongs to Christ.

Barry,
Of course scripture does not teach heresy, that is just absurd but your interpretation of scripture is a blasphemous heresy, one which was rejected and condemned even by the heresiarchs Luther and Calvin.
The plain text has been available for 2000 years, to interpret it without the insights of Sacred Tradition is folly.
Do you really think you have a greater insight than Sts Jerome and Augustine and the great Fathers of the Church?
Are you actually familiar with their commentary on this verse of scripture?
Have you no comprehension why Catholics, Orthodox and the Oriental Churches interpret this passage as they do?
Do you not believe the Holy Spirit leads the Church into all truth, and part of that is that He has lead us to understand the Perpetual Virginity of the Virgin Mary?
Your denial of that Truth cuts you off from the authentic Christian belief.

I obviously haven’t seen the original comment from Barry Tomlinson but from Fr Blake’s comments about it it seems like yet another example of people saying that their interpretation of the Scriptures is more accurate than that of the Church. Well, we’ve had plenty of people saying that over the centuries and look where it’s got us. Umpteen thousand different Protestant denominations all claiming that only they have the correct interpretation. And all claiming that their interpretation is guided by the Holy Spirit. Except that they don’t claim to be infallible. Just correct. Thank goodness some people eventually see how ridiculous this is and realise that the one true Church is the Catholic Church.