Cathcon calls this "not just liturgical decadence but depravity", as much as I respect Chris he doesn't live in Brighton where we know about real depravity. I would suggest it is sad, in the same way as that Italian Archbishop, in pink with facepaint is sad. Both would have me running out of Church, and if I was a parent I would wonder if my child was quite safe in these situations and not just from a spiritual point of view.

Both seem to be about clergy and communities who have lost sight of the Mass as being anything beyond a source of social cohesion, both are serious signs of a tired Church, which is decaying, decadent, that has lost any sense that it supposed to bring Mankind into the presence of God, it is merely horizantal.

The video shows two women wafting incense around whilst a man bellows that, now ancient, and certainly tired ditty, "Spirit of the Living God", whilst a congregation looks on bored.
The great problem is that with "liturgies" of this kind is that they say more about the celebrant than Christ and His Church. We priest are often inadequate, sometimes quite damaged, like the rest of mankind we have to learn to live with that but so often in the "reformed" liturgy, the liturgy can be used as form of therapy, not for the congregation but for the priest or bishop. 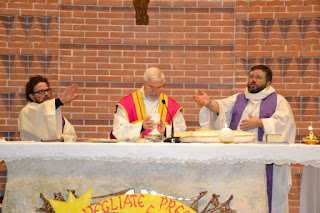 I am sure the Italian Archbishop is a fun nice guy but what is his problem? Why is he so desperate to to communicate his ability to be approachable, "at one with his people"? Actually, there is something quite sinister about it, an old man with face paint is very strange. There seems to be a certain moral weakness at the heart of this, a sense that he, and his even more sinister looking priests, needs to be accepted and loved maybe. Why is he not content to let Jesus speak through him, why does he have to get in the way?

The Church is for the damaged; prayer, the sacraments heal, so does feeding the hungry, clothing the naked, visiting the sick and imprisoned. Jesus tells us to do those things as good things aimed at ourselves first, before they are a service to others, so that we might forget self and learn to live for others. That is Christian therapy, not the blatant celebration of self but learning to disregard self.
Monophonic Chant, the Church's music is about the many forgetting themselves so as to sing perfectly at the same pitch and rhythm so only the voice of the Church praising God sounds, when any individual stands out it becomes ugly and is distorted. We have to learn to say with the Baptist, "I must decrease...".

The liturgy too is healing but the healing comes through conforming ourselves  to Christ and forgetting self, personally I find the traditional Mass helps this damaged, foolish, inadequate man to come closer to God, it is all that dark muttering about being unworthy and then turning to the people to tell them "Dominus vobiscum" or announcing "This is the Lamb.... Maybe it is the quite muttering of one's sinfulness with a few intimates that gives a model in the ancient rites, maybe having a public pentential rite actually within Pauline Mass itself makes us want to exhibit our inadequacies publicly.

Tell me Father. Why isn't the new CDF looking into these priests and laity causing these blatant abuses?. No, he goes after the SSPX, which doesn't nearly do the spiritual damage that these groups do. Why is it that this is allowed to continue?. Why doesn't the Pope put his foot down?. Is the Pope really running the church?. Or are there others who are holding the keys?. Maybe we need to bring back an Emperor, like Constantine, to govern the Church!. I know the Pope is frail, but this really needs to stop!. I am really beginning to wonder if I shouldn't leave now and move on to an Eastern or Oriental Orthodox Church, since I am 46 and want to express my faith in a traditional form on a regular basis, before I die. Rome seems to be conciliar anyway, with Bishops doing whatever they please with the OF Mass, and the Pope showing no action against these liturgical abuses. EMHCs, Altar Girls, priest facing people, bad music, etcc. This Archbishop with the pink chasuble is in the Popes back yard in Italy!. Is he that secluded?.

My first reaction to this is this is demonic.

Robert: I think you have to remember how small the Vatican curia is and the enormous workload such as the CDF has to deal with coming from all over the world. It should really be up to us and our local Church to deal with abuses rather than always waiting upon the Pope to do something.

"In the Third Secret of Fatima it is foretold among other things, that the Great Apostasy in the Church will begin at the top." Cardinal Ciappi, 1991

Having good Liturgy is very important but a poorly formed priest can make a mockery of anything even unknown to himself. Pray for our priests.

Robert: I think you have to remember how small the Vatican curia is and the enormous workload such as the CDF has to deal with coming from all over the world. It should really be up to us and our local Church to deal with abuses rather than always waiting upon the Pope to do something."

The CDF sure finds time for the SSPX though. Doesn't he!! Unacceptable excuses!!!. If this is allowed to take place. Than I will go to an SSPX chapel and receive holy communion whenever I please. And don't give a hoot about what the CDF says or does. Because he has allowed this type of anti Catholic display to continue!!. So him saying anything about the SSPX and what they need to accept is very hypocritical, when this is allowed to continue.

Robert,
1, The Holy Father is pursuing the SSPX to brinbg them back into Communion with him, which was broken by the sin of disobedience.
2, Bishops like this behave like this, like the SSPX Bishops, because the refuse to listen to the Vicar of Christ
3, The Pope as Supreme Legislator can only act through the law. he cannot make it, as some Bishops do, as he goes along

Note the impressive number of adult males in the congregation. . . .

Having now actually watched the video I have rarely seen anything quite so idiotic. It had me laughing and somewhat cheered me up on a cold dark day.

A free-standing altar is about the same shape and size as an ice cream fridge and that is another reason why it preferably should not be free standing and certainly never stood behind.

This picture looks as if the president is just about to insert his scoop and draw out a strawberry or vanilla flavoured glob.