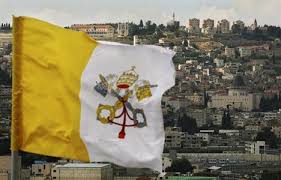 According to the Pope's latest Motu Proprio, "On the Service of Charity"


A charitable agency may use the name “Catholic” only with the written consent of the competent authority, as laid down by canon 300 CIC.

Presumably nothing can stop Tina Beattie describing herself as a Professor of Catholic Studies providing she is merely studying Catholicism as a phenonema rather than claiming she is a Catholic Professor or claiming to teach Catholicism. However it does seem strange that having had her invitation to speak Clifton Cathedral cancelled she is now speaking at the invitation of Westminster Diocese's Justice and Peace Commission, presumably, as she has recently become such a controversial figure, with the personal sanction of Archbishop Nichols.

The Motu Proprio does state that the Bishop(s) are responsible for the theological formation and direction of Catholic organisations, they cannot wash their hands of this responsibility and leave it up to ambiguously "Catholic" theological advisors, as Cafod has done and been alllowed to do in the past.

"I hope the next addition has the written permission from the competent authority displayed on the front cover."


You don't really hope that, do you Father?

I wonder whether Tina's invitation was something to do with a certain "Justice for Tina" campaign.

Who is the "competent authority"? If a bishop, archbishop or cardinal displays his incompetency on a regular basis will there be recourse to another authority who is competent ?

Thank you, Holy Father. I hate to say this, but at least in the States, the rot is so set in, it will take a miracle to change things. Most dioceses either blindly follow the liberal leftist stuff coming out of the social justice office of the USCCB and give accordingly, or the problems are entrenched at the local diocesan level.

Sadly, I have personal experience of this-trying to change chancery cultures, in departments run by feminists and even non-Catholic who do not support the teaching of the Church-this will be an uphill struggle. But, the Vatican cannot be ignored for long. Let us pray for the bishops.

Yes Eccles, it was your campaign for the Roehampton One.

But is she saved?

The injustice gets magnified when you consider Michael Voris had to rename Real Catholic TV, Church Militant TV when liberals complained but if any orthodox person complains about the Tablet or NCR they'll be met with a wall of silence. Roll on the biological solution.

I think we tend to gravitate and remember the bad news, but Dr. Peters reminds us that we are a bit spoiled because he remembers the 70's and the churches with felt and burlap banners. :) To which I would add in those days the Usual Suspects had an near total monopoly on information and only a layman with a good set of library skills and access to resources could cut through the bs. With the advent of the net, suddenly the Leftist Catholic cabals had to compete in the marketplace of ideas and have had the butts handed to them, so while they still have a lot of control of liturgy and chancery offices and are still capable of massive damage to the Church, they have very few people to pass this legacy on to. So while much of society is determined to ride this progressivist Titanic all the way to the bottom, the Church is the one lifeboat with plenty of room, but none for people who want to tether it to the sinking ship.

Am I being dense here? A newspaper or magazine is not an 'agency' so why use The Tablet as an example?

Amfortas, the Tablet belongs to a charitable trust whose object is to pass on knowledge and understand of the Catholic Faith, in that sense it is an agency.

The bishop of Kansas City-Missouri tried to stop the NCR using the word ‘Catholic’ back in 1968 but without any success:
http://te-deum.blogspot.co.uk/2012/12/what-is-real-status-of-national.html
But he only ‘asked’.

Since they participate in the mission of the Church, all the Christian faithful have the right to promote or sustain apostolic action even by their own undertakings, according to their own state and condition. Nevertheless, no undertaking is to claim the name Catholic without the consent of competent ecclesiastical authority.