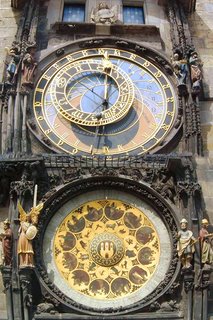 Daniel Mitsui always has something interest on his website have a look at "public clocks of the late Middle Ages". Most as you can see were built for Churches, there purposes was, I think, not so much to tell the time or regulate the offices, the medieval day varied in length according to the season. The working day lasted for as long as the sun shone. Vespers could be as early as 3pm in winter or after 8pm in summer, and was shortened or lengthened according to the season, as were all the offices. For the working or liturgical day the sun dial would have been more useful.


These are beautiful objects, whose complexity and intricacy are a model of the orderliness of the cosmos, that is ruled over by God.
at July 28, 2006